This year has already seen its fair share of complex, unforgettable real-life figures to receive the documentary treatment, and Jesse Vile’s Jason Becker: Not Dead Yet (2012) is no exception, in a film which manages to be simultaneously heart-breaking and inspiring. Becker was someone who lived and breathed his passion, morning, noon and night. He became a fully-fledged guitar virtuoso at the tender age of 14 (the school talent show footage of a blistering solo performance is really something to behold), and with the support of his parents, he (successfully) completed high school early when a glittering career beckoned.

Signed up by Dave Lee Roth as a guitar replacement (filling the boots of two bona fide legends in that field, Eddie Van Halen and Steve Vai) Becker was diagnosed with a degenerative condition, Lou Gehrig’s Disease, soon after. It left his body in an atrophied state before he was even out of his teens, first forcing him to bow out of an upcoming tour, due to his inability to perform, before causing him to completely loose control of all bodily functions. 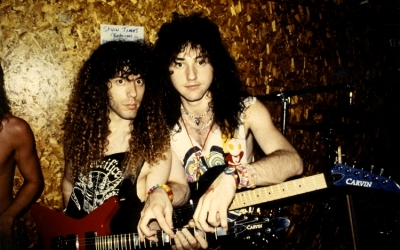 With Not Dead Yet, Vile has constructed an intimate glimpse into the musician’s life here, and Becker’s loving and supportive family and friends form the narrative glue, offering some the film’s most touching moments. It’s hard not to be moved as his father describes Becker’s reluctance when the time came where a wheelchair was a necessity. To further emphasise this tragic turn of events, Vile intercuts home video footage with this, showing Becker as a healthy youngster being carted around the garden in a wheelbarrow by his dad.

It’s a good 40 minutes or so before the musician’s tragic twist of fate is revealed, and that painful inevitability constantly weighs on your mind as the long list of contributors and industry associates talk of his early success. Yet the film isn’t interested in wallowing in the sadness of the situation, and the stoic optimism and herculean display of self-acceptance shown by Becker is what really gives Not Dead Yet its emotional resonance. Flickers of that bouncy, fun-loving teenage guitar sensation are still evident across his serene face and that makes for an incredibly poignant and life-affirming portrait.

The overriding mood here is celebratory, and if the film casts its subject matter in an overly angelic light, it’s because Becker’s life prior to his debilitative state was free of that hard-living, rock and roll clichéd lifestyle (as both family and colleagues attest to). He had barely entered adulthood when his disease robbed him of the ability to truly blossom (or indeed fail) in that arena, yet as Jason Becker: Not Dead Yet proves, even when all hope is seemingly lost, the human spirit can prevail.

You can read our interview with Jason Becker: Not Dead Yet director Jesse Vile here.