“The results were astonishing.” This is, by far, the most recurrent turn of phrase used in Lee Fulkerson’s profound analysis on the western diet, Forks Over Knives (2011), released on DVD this week in the UK. Fortunately, rather than being simply a lazy, unvaried attempt at proving minor point, Fulkerson’s collection of scientific data and dietary figures truly is beyond astonishing. Unlike similar protein vilifying entries such as Shaun Monson’s Earthlings (2005) or Robert Kenner’s Food Inc. (2008), Fulkerson has ignored shock tactics in turn for permitting alarming statistics to be the real food for thought, whilst suitably captivating his audience.

Applying easily digestible pie charts, 3D graphs and enough scientific actualities to cajole a cow to commit suicide, Fulkerson has culminated a coherent report with a very explicit message: our universally accepted animal-based diet is eradicating the human race, one cancerous cell at a time. As malnourishment continues to soar into the billions, we, as consumers, become convinced that the only resolution is plant-based alternatives to our meat and dairy foodstuffs – and this is all owed to Fulkerson’s unrelenting tenacity. 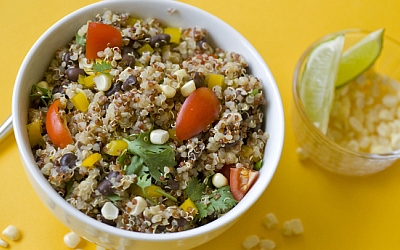 With his unflappable, collected narrative, Fulkerson is able to introduce leading medical figureheads and offer objective conclusions that are not incessantly rammed down your throat. Furthermore, with a more practical and less comical approach Fulkerson adopts a subtle Morgan Spurlock self-experience subplot. Like Spurlock’s burger berating Super Size Me (2004), Fulkerson offers a record of his own dietary plan, albeit less extreme. Over thirteen weeks, he follows a wholefoods plant-based food program, which is reviewed in short intervals. Of course, he found his physical and mental state drastically improve. It’s an inevitable bias to a documentary on a hot topic – yet it’s a bias full of heart.

The caveat to these good intentions is reflected in all the characters Fulkerson interviews and all the points made. While each research model and historic fact makes for astounding revelations, the solution does not waver or alter: stick to the wholefoods. It is undoubtedly hard to remain impartial when the results are this clear, but as the movie travels, we soon find ourselves in an infinite loop of repetition.

Forks Over Knives is a candid, intimate and moreover essential take on a topic stigmatised by the masses and ignored by too many medical bodies. As the doc addresses, the West has the most advanced medical technology in the world, yet we are also the sickest by nearly every measure. Thankfully, the sprightly, rosy-cheeked routines of Fulkerson’s excessively healthy interviewees (many of whom over 50) comes as a strong reassurance that a straightforward change in the way we look at food is all it may take to rid ourselves of preventable disease.