Ballroom Dancer (2012), an unassuming but absorbing picture by Andreas Koefoed and Christian Bonke, follows the late-career travails of Ukrainian Latin dance prodigy Slavik Kryklyvyy, a fiery, prickly figure struggling to recapture his former glory. Unflinching in the face of artistic anxiety, it’s a candid look at the high-pressure world of competitive dance. While the various dramas and tantrums have the unwittingly salacious allure of soap opera, there is something sadder, more mournful going on beneath the surface. It becomes apparent that Ballroom Dancer is not really about a competition; it’s about reconciling a love story with a ghost story. 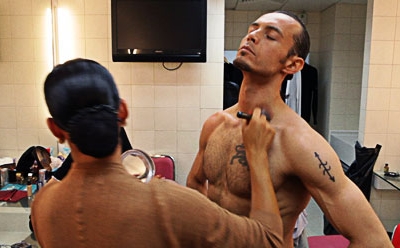 Kryklyvyy was once a world champion in Latin dance. With his then-lover Joanna Leunis, they scaled the heights and reaped the rewards. While Leunis continued to dominate the professional arena after their breakup, Kryklyvyy floundered. Ballroom Dancer charts his journey to relive those halcyon days, this time with his new, younger girlfriend, Anna Melnikova. But Anna is not Joanna on the dancefloor. Slavik cruelly goads her in rehearsals, often to the point of tears. But, behind the demands, there’s a naked yearning. He has got himself into the precarious position where artistic and professional success are permanently intertwined with his romantic life. Leunis is never seen, but she haunts the proceedings. So much so that one is tempted to see her absence as the real protagonist.

She drives Slavik, she plagues Anna. Rehearsals often descend into volatile slanging matches, and Leunis’ memory is always there in the background. The picture’s intimacy is key in this respect; by seeing everything, we understand more. Koefoed and Bonke never blink; they know that if we see the fights and the tears, we will better appreciate the currents that underpin them. Their strategy also helps to convey the pressure of competitive dance. We sense time passing and the stakes building. It becomes apparent that success in Latin dance is predicated on how much it consumes the dancer’s life. Kryklyvyy instinctively recognises this and acts accordingly. He needs to give not only his athletic yet ageing body, but also his mind. The toll is apparent, not only on him as a hardened veteran of the scene, by on Anna as an ambitious up-and-comer. Koefoed and Bonke’s approach is unambitious, and occasionally pedestrian, but they clearly understood that it was the only way to convey their vision on a limited budget and through the form of documentary. It can plod and drag, but there are riches to be found in its unflinching gaze.