Over seven decades since he first began making his name with the kind of fun, Z-grade schlock this film falls way short in replicating, executive producer Roger Corman unleashes yet another atrocious monster mash-up for the SyFy channel, Piranhaconda (2011) which makes its debut over here on DVD. Michael Madsen is intrepid, bandana-sporting scientist Professor Lovegrove, trekking through the wilds of Hawaii in pursuit of a mythical creature known as the ‘River Devil’. Discovering a nest of eggs belonging to said creature, his team is wiped out by the 60ft snake/fish hybrid, which also sets its hungry sights on the crew of a horror film shooting nearby.

Lovegrove is kidnapped by a bunch of mercenaries, but they’re soon forced to work with the surviving members of the film (featuring a model/actor who goes by the strapping name of Rib Hillis) as they try and avoid being Piranhaconda hors d’oeuvres. Eschewing any moments of suspense, the creature is reveals in all its pixelated glory a mere four minutes in during the opening credits, where it receives its own 1960s rockabilly-esque theme tune (the film’s only fun concession). Sadly, Piranhaconda is another soulless, insipid exploitation pic which SyFy have been churning out for a number of years now, sorely missing the point of this genre with each successive film. 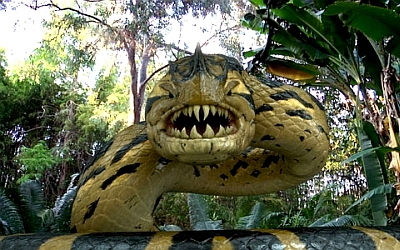 Those original purveyors of trash cinema never purposely set out to make a ‘bad’ film. The fun derived from Piranhaconda’s early predecessors was the straight-faced earnestness on display and (as censorship gradually became more relaxed) the lashing of imaginatively-dispensed gore and gratuitous female nudity. Presumably under the SyFy network proviso, any trace of this is thoroughly diluted in here. The computer-generated bloodletting is, unsurprising, tame, and the female victims, however buxom they may be, meet their demise with bikinis intact, making for a depressingly anaemic (and creatively redundant) affair.

The saddest sight of all, however, is that of Madsen, who must have severely burned his bridges in Hollywood. He mumbles his way through several layers of bone-crushingly dreary exposition as if it’s a race to be done and out of there (which was probably the case). From the looks of it, he didn’t even bother to stick around to film his character’s fate either, as this is achieved via some crummy ADR and a brief glimpse of a stand-in wearing his character’s straw hat.

Not even the idea of having a crew shooting a similarly bad B-movie within the actual film itself leads to any moments of satire or self-referential humour, and for a film which purports to do nothing else but offer brainless entertainment, Piranhaconda achieves anything but this. There must only be a few dangerous creatures left to splice together for the sake of entertainment, so let’s hope this is one of the last.