The Blair Witch Project (1999) has an awful lot to answer for. Despite numerous efforts, seldom does a feature manage to replicate its successful use of found footage, or attempt to do something interesting within the resulting sub-genre. The majority of entries have simply not stacked up, yet it’s still a thriving form within the world of horror, with this month offering up two new examples. Following last week’s shaky-cam anthology V/H/S (2012), comes low-budget British chiller Hollow (2011). Sadly, despite opting for a pervading sombre mood and general creepiness over outlandish jolts, this indie film never quite works.

An age-old setup sees four young friends (two couples, how sweet) heading off for a romantic weekend away in rural Suffolk, in an attempt to clear out the home of Emma’s (Emily Plumtree) recently departed grandfather. Accompanying her are her jock fiancée Scott (Matt Stokoe); her best friend, pining ex-lover, and de facto cameraman, James (Sam Stockman); and James’ current squeeze, the ever-so-possibly promiscuous Lynne (Jessica Ellerby). Once they arrive at the abandoned house, however, a local legend and a seriously creepy tree begin to take a hold on them. 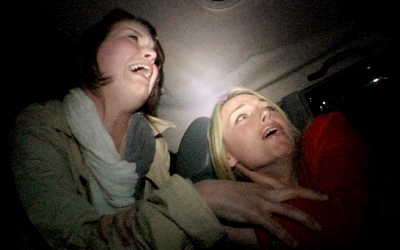 James’ introversion, suggested psychiatric issues and lingering obsession all give a fairly stable answer to that ever-present question, ‘Why are they still filming?’. This is fortified by the fact that the camera needs to be recording for its light to work – and lord knows  this bunch need some form of illumination out there in the sticks. It doesn’t entirely remove the pertinent question though, and there are definitely times that the presence of the camera seems entirely inappropriate.

Hollow’s indie origins betray themselves through a slow-burning opening act that is more concerned with group dynamics than scares. This is both a positive and negative aspect of the enterprise. It’s nice to see director Michael Axelgaard (great name, by the way),trying not to rely on cheap scares, but the plot does begin to drag somewhat. Once the legends of the hollow begin to be uncovered, there are some more straightforwardly conventional set pieces. The kind of noise in the dark that sets people running and end up being a camera flailing wildly whilst someone pants very loudly. The eerie ruined monastery near the tree is criminally underused, and the second act is almost derailed in a bizarre sequence that sees them all decide, inexplicably, to take cocaine.

All four performances are absolutely fine considering the production’s constraints, and Hollow does claw things back by ending on a nicely disquieting note – yet the build up, as it stands, remains far too drawn out. Whilst Axelgaard as a director could be one to watch, in this instance he’s regrettably hamstrung by the tired trappings of the found footage cycle, into which he is unable to breathe fresh air. Still, that tree is pretty creepy, wouldn’t you agree?