Every once in a while, a film comes along which makes you plain embarrassed to have even watched it. Universally panned Hollywood ‘comedy’ That’s My Boy (2012) is one such film. Directed by Sean Anders and starring Adam Sandler (*gulp*), Andy Samberg and Leighton Meester, this crass comedy is about as funny as the headache you’re left with after having sat through it. We begin with teenager Donny (Justin Weaver), who fathers a son, Todd, with his high-school teacher, Ms. McGarricle (Eva Amurri Martino). With McGarricle put in prison, Donny raises Todd singlehandly until, on his 18th birthday, Todd vows never to see his pater again. 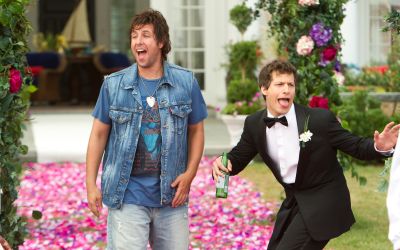 Todd (Samberg) is now a successful Wall Street financier and about to marry the beautiful Jamie (Meester), who has no idea about his dubious parentage. As a result, when Donny (Sandler) turns up on the eve of the wedding for a reunion with his son, the scene is set for comic pandemonium. Predictably, there’s precious little good to say about this inept, expletive-ridden drivel. However, as every film deserves some degree of critique – even if only to warn would-be viewers to give it as wide a birth as humanly possible – here goes nothing. The Cape Cod setting where the majority of That’s My Boy plays out is stunning, yet when the best thing about a film is its location, you know you’re onto a surefire dud.

Some may say that you deserve everything you get when you watch a film featuring Sandler, the king of lewd humour. However, to give him his dues, he has been in some reasonably funny features over the years, including smash hit The Wedding Singer (1998). Unfortunately, on the strength of this fetid offering, it appears his best days are long since past. More embarrassing still is the participation of Oscar nominee James Caan and Oscar winner Susan Sarandon.

It would be good to be able to say that the DVD and Blu-ray releases of Anders’ That’s My Boy are enhanced by the bonus features, including a gag reel and behind-the-scenes featurettes. Sadly however, it’s doubtful that anything could save this woeful waste of time and money, and to say anymore would be to quite frankly give it way more credit than it deserves.