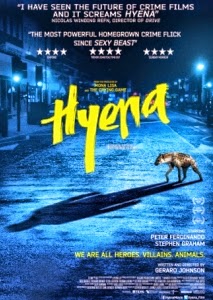 Opening films at festivals are often easygoing curtain-raisers that provide a bit of glamour before guests scatter into all manner of inevitable industry after-parties. But guests at last year’s 68th Edinburgh International Film Festival stumbled out of a violent, cerebral, police noir. It was a brave choice, that never quite convinced as the right fit (it appears to have no relation to Scotland and its film industry) but Hyena (2014) is a cut above the average London gangster flick all the same. Gerard Johnson’s sophomore feature might look on the outset like the type of London crime thriller usually populated by Jason Statham, but it’s more emotionally complex than its outset gives it credit for.

Peter Ferdinando, commanding in the central role, is Michael Logan, a jaded drug squad officer who himself is involved in the rings he’s supposed to be policing. When a botched plan to transport cocaine from Turkey fails, his associate is butchered by a rival Albanian gang. His involvement gets muddied after being brought in to help with a police operation to bring down the Albanians, all while Michael and his team are being watched by snarky corruption officers. The introduction of a Ariana (Elisa Lisowski), “owned” by the gang, adds a token of emotional complexity to the scenario. Before everything changed, Michael headed up his personal kingdom selfishly, and our protagonist’s eventual realisation that his actions ultimately have consequences is powerfully evoked by Ferdinando.

Johnson has a cool eye for shots: an opening slow-motion drugs bust, alongside ultra-violence, dream-like sequences and electronic music from The The might bring about comparisons with Nicolas Winding Refn’s Drive (2011). Its closest competitor might be Daniel Wolfe’s Catch Me Daddy (2014) which also captured violence in a film with an aesthetic sensibility. Hyena’s issues lie in a smattering of clichéd character types – women are ciphers, Albanians are brutish thugs – and personalities are rarely well developed. It’s unfortunate, as Ferdinando does such a good job capturing the scrappy, scavenging titular cop, but even Stephen Graham’s role as Michael’s former partner is reduced to describing their relationship awkwardly to the audience through conversation. Yet Johnson is adept at carrying all the baggage that come with such a meaty thriller, and the concluding tragedy comes across with a novelistic sensibility. While its ending does feel a little like a cop-out, the overall structure is innovative, and you’d imagine that Johnson has a good career ahead.

This review was originally published on 18 June, 2014 as part of our coverage of the Edinburgh Film Festival.