A starkly-shot Russian addition to the Berlinale’s Forum section, Svetlana Baskova’s For Marx (Za Marksa, 2013) might not have much cinematic polish, but what it lacks in looks it makes up for with a thorough exploration of geopolitical themes, wrapped in a pithy, compelling drama. A group of hardy steel workers decide to establish an independent labour union to protest against wage cuts, poor working conditions and redundancies. After rallying the workers to their call, they come face to face with the underhand tactics of their petulant oligarch employer, entering into a world of corruption and brutal mob tactics.

This is the second of two Russian films (the first being Boris Khlebnikov’s A Long and Happy Life) screened at this year’s Berlinale that explore the corruption of the Russian political system. The skill utilised throughout Baskova’s mediation on the consequences of the economic down turn in Russia is remarkably acute and scathing. As an intellectual drama, it elegantly conveys weighty ideas ranging from the critiques of the Vertov Group’s Wind from the East (1970) to the merits of Nikolai Gogol’s Dead Souls. There is even a cinema club where workers pit Brecht against the Hollywood system, that causes more than a few titters. 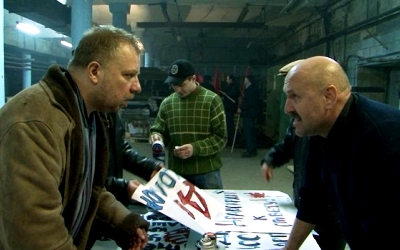 As the workers spend their free hours discussing political, literary and cinematic theory, whilst lamenting the poor education of their younger colleagues, a wider critique of the inherent problems caused by the 2010 economic downturn is explored. Even in its denser moments, there is still plenty of smart comedy on show, tonally balancing the weight of the drama with light relief. This is perhaps most apparent in the outlandish portrayal of their employer, who swaggers around his offices whilst embezzling money and bribing government officials to build his art collection. Then the jovial discussions stop, the actions of the workers invoke dire consequences, and For Marx’s potent farce turns into something much darker.

Two workers are gunned down when leaving work, leaving the Falstaffian foreman fearing for his life. From this point on, our hero has to decide whether to continue to fight for his worthy cause or bow down to the weight of the management. This opens up a wonderful character dissection of a man caught between fearing for his life and doing what is morally (and economically) right.

Impressively performed and wittily scripted, Baskova’s For Marx rings of Tolstoy for the modern age, satirically pulling apart very real and potent issues faced by working class Russians pushed, into more desperate situations by the greed of their employers and leaders.