Based on Matthew F. Jones’ dark and atmospheric novel of the same name, David M. Rosenthal’s A Single Shot (2013) finally makes it’s debut at this year’s Berlin Film Festival. Staring US actor Sam Rockwell and boasting an enticing supporting cast that includes William H. Macy, Kelly Reilly and Jason Isaacs, A Single Shot is, despite its evident qualities, a film that ironically misses the mark. John Moon (Rockwell) spends his days alone in his isolated trailer lamenting the recent exodus of his family, breaking the monotony of his wearisome life by entering the neighbouring forest and partaking in some prohibited deer hunting.

On one of these highly illegal poaching trips, John accidentally shoots a woman whilst chasing his quarry through the dark, misty woodland. Shaken and confused, he attempts to hide her corpse in a local quarry, where he discovers a large sum of money – without thinking twice, he swipes this substantial payload. However, the money belongs to a local felon, and from this moment on the hunter becomes the hunted. A Single Shot utilises the tried and tested thriller formula utilised by the Coen brothers by observing a foolish man who, thanks to one rash decision, finds himself in a downward spiral of escalating misfortune. 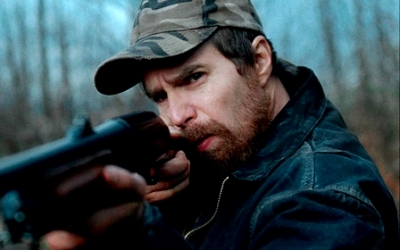 Shot through a nightmarish filter of cold greys and blues by Eduard Grau, and employing an effective score of intense penetrating strings, there’s little denying that A Single Shot is an atmospheric, sensory excursion that understands how to achieve near-Hitchcockian levels of suspense. Combine these elements with a solid performance from Rockwell, and you have all the necessary ingredient for a taut and enthralling thriller. So why does it feel quite so lacklustre? Perhaps the film’s biggest flaw stems from the screenwriting process. With novelist Jones the film’s primary script writer, the characters feel all too flat on the big screen, needing more fleshing out for an audience to be able to engage with them.

What often works in literature nearly always fails to transfer verbatim in cinema. Jones is also clearly unwilling to strip down his novel’s action in order to create a concise and comprehensible plot with not one but two moral quandaries thrown at the audience. Far too convoluted to be truly enjoyable, what should have been a tight narrative focused on one man’s internal struggle with the moral complexity of his actions is unfortunately a chaotic mess of undeveloped ideas.

A Single Shot is a perfectly adequate example of lazy late night entertainment, gripping you from its captivating exposition, before holding your attention just long enough for you to want to uncover its conclusion. Sluggish, needlessly complicated and noticeably lacking in fluidity, Rosenthal’s atmospheric thriller might get the job done, but ultimately feels like a forgettable piece of gritty American escapism.