Harry Patramanis’ Fynbos (2012) is an enigmatic parable for modern South Africa’s evolution away from its troubled past. A tense and atmospheric thriller-of-sorts, Patramanis’ assured debut captivates through its hypnotic rhythm, yet remains a strangely unsatisfying experience – a great pity. Stood on a rundown street corner, Meryl (Jessica Haines) disposes of the contents of her bag and purse in a trash can before calling the police to report a mugging. This curious exposition introduces us to our weary protagonist’s peculiar manner and leads us to the obvious conclusion that all is not quite right in Meryl’s world.

Meryl’s husband is a real estate developer who, thanks to a poor business decision, has found himself in a precarious financial position. Their economic stability rests on the sale of a beautiful multimillion dollar property, sat high up in the hills of the Western Cape overlooking the landscape of a country still baring the scars of apartheid. Meryl and Richard head up to the mansion to welcome a pair of potential buyers from the UK. However, whilst circumventing the property’s overwhelmingly vast acreage, Meryl goes missing, leading to a tense and nervous manhunt that raises more questions than it does answers. 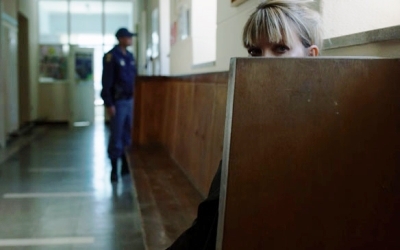 Fynbos is a beautifully rendered metaphor for a country attempting to move away from its troubled past. From the scars and bruises Meryl writes about in her diary, to the muted score that silence the outside world, Patramanis has crafted a decent film about papering over the cracks of history, told through a tale of implied domestic abuse. Sustaining a constant degree of tension throughout, this well-presented thriller combines evocative atmospherics with a deliberately pedestrian pace that makes full use of purposeful pauses and uncomfortable silences. This results in a work that not only looks fantastic, but also manages to subtly slither into your subconscious and illuminate your own deep-seated anxieties.

Sadly, Fynbos is also a film fraught with a heightened degree of nervous anxiety, yet remains infuriatingly low on substance. This constant mood of unflinching urgency thrusts you into this insular scenario, and whilst the film’s constant reverberation of the crimes of the past echo throughout, the actual story which plays out on screen is far too drawn out and lacking in any semblance of a solid narrative foundation. Combine this with a dull and disagreeable protagonist and you have a drama that’s difficult to become engrossed in. Consequently, Patramanis never really makes the most of his fascinating narrative twist, culminating in an unsatisfactory finale that grinds to a halt, rather than providing an adequate conclusion.

Fynbos is a psychological thriller that, through its attempts to encompass the hefty subject of South Africa’s humbled national identity, is little more than a visually ostentatious, surprisingly futile example of high-art cinema at its most frustratingly mediocre.