★★★☆☆
Rereleased on DVD this week alongside Gilbert Gunn’s 1953 effort Valley of Song, The Last Days of Dolwyn (1949) is a refreshingly regional British drama from directors Russell Lloyd and Emlyn Williams. Set amidst the titular mid-Welsh community of Dolwyn in the days leading up to a cataclysmic flood that submerges the village, the film revolves around an ongoing dispute over land ownership. With significant similarities to later working class dramas, including Bill Forsyth’s north-of-the-border tale Local Hero (1983), Lloyd and Williams’ near-forgotten work has undoubtedly played a part in shaping non-English national identity on-screen. 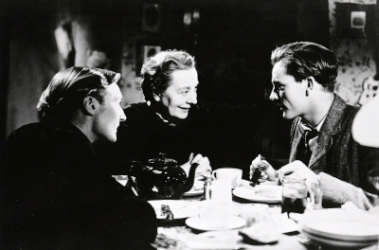 The picturesque Dolwyn is known across Wales for its friendly populace and their humble existence. However, when a ruthless English water company sees an opportunity to make – in their minds at least – better use of the land by completing a planned reservoir on top of it, the villagers are encouraged to relocate to a far-off Liverpool suburb. A campaign of resistance is lead by Gareth (Richard Burton, in only his second feature), an embittered local who has recently returned from Liverpool, and is now intent on preserving the green, green grass of home.

Providing a tantalising glimpse as to just why Burton would go on to become one of the greatest stage and screen stars of his generation, The Last Days of Dolwyn is an oft-charming, Welsh-centric drama concerned with blood ties, brotherly loyalty and familial bonds, featuring several winning performances by an eclectic cast of British acting talent. Unfussily shot and caught between two distinct languages (Welsh and English), it’s not difficult to see why the film struggled to find its audience upon theatrical release. Lengthy sequences of untranslated (and as yet non-subtitled) Welsh dialogue will undoubtedly pass most viewers by, but there remains a strange charm in having to use a little guesswork to decipher some of Dolwyn’s quieter scenes.

Though hardly an unearthed gem, Lloyd and Williams’ The Last Days of Dolwyn is an amiable and ultimately enjoyable snapshot of village life in late 19th century Wales, galvanised by several strong turns and a compelling, if familiar, central dichotomy between rural sanctity and big business. What’s more, it’s telling that Burton himself never forgot his modest roots – the Pontrhydyfen-born actor reputedly wore a piece of red every day of his life to remind him of his beloved valleys.