Beginning as a train hurtles down a track, accompanied by a deep, baritone Welsh choir booming out over the opening the credits, Gilbert Gunn’s 1953 film Valley of Song (rereleased by StudioCanal) successfully brings Cliff Gordon’s celebrated play Choir Practice to life in the form of a light-hearted comedy. Returning to the idyllic village of Cwmpant after years spent working in London, we watch on as cheery protagonist Geraint Llewellyn (Clifford Evans) is greeted by one and all as a returning hero. Soon re-established in his aged auntie’s cottage, he is elected as the choirmaster to a flock of seemingly jovial songbirds of the local parish.

When Llewellyn has to choose between two rivalling families for the lead part in the annual performance of Handel’s Messiah, he rekindles an old feud between the Lloyds and the Davies families. Trapped in the middle of this age-old grudge are the valley’s very own Romeo and Juliet, Cliff Lloyd (John Fraser) and Olwen Davies (Maureen Swanson). Blithely told, with plenty of laughs along the way, this Gunn’s gentle comedy drama is a pleasant dissection of the squabbles of an inward looking community set among the rolling hills of the Welsh valleys. 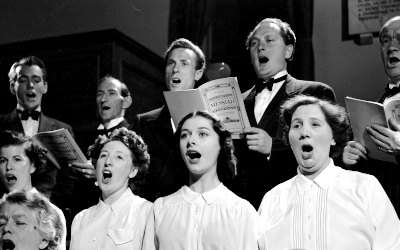 The film’s setting is of the chocolate box village variety, where the milk is delivered be the gossiping Bessie Lewis (Rachel Roberts) by cart, who daily invades peoples houses for a cup of tea and a natter. On every corner there are broods of clucking housewives peeping out from behind the curtains, whilst the local pastor (bicycle clips and all) cycles down the village lanes. Valley of Song’s, the source of the film’s real dramatic drive, is captured suitability by Fraser and Davies, who as spring lovebirds are torn between family loyalty and their desire to get married. We see them ‘courting’, meeting when they can high on the hills of the valley or wooing each other at the local train station where Cliff works in the ticket office.

Evans’ Llewellyn is a kindly character, who hangs almost in the background of the dramatic action; best when standing in front of the choir conducting and attempting to hold together the harmony as discord runs rife in the village. We get a few amusing punch ups between the warring clans where voices are raised and it all feels a little light and silly, but in an agreeable way that gleefully pokes fun at the trivialities of the narrow minded, but well intending, patrons of the village.

The action is frequently broken up with musical interludes ranging from full-blown choirs to housewives offering up tuneful renditions of local ditties or black-faced miners belting out Songs of Praises. Ultimately, Gunn’s Valley of Song chortles along at a merry pace, proving to be an enjoyable, if inconsequential, parochial comedy that thoroughly entertains whilst passing sweetly in one ear and out the other.