The title of David Palmer’s sophomore feature, Hit and Run (2012), is a little misleading; in truth, it feels more like a gentle nudge and a light jog. Despite an ensemble cast that includes comedy hot property in the shape of Bradley Cooper and Jason Bateman – with the latter’s appearance lasting no more than five minutes – its performances, though not poor in terms of ability, fail to deliver anything that make the film worthy of the genre. Charlie Bronson (Dax Shepard) is a getaway driver with a mysterious past, having spent the last four years in witness protection, forming friendships and a loving relationship with Annie (Kristen Bell).

Bronson is once again forced to choose between losing the girl he loves or confronting a dangerous past full with of the mistakes he chose to run away from. As the couple race across country in Bronson’s beloved Lincoln to make a job interview for Annie, things become increasingly complicated and nauseatingly slapstick as they are pursued by cops, US Marshals, crazed criminals and an obsessive ex-boyfriend. 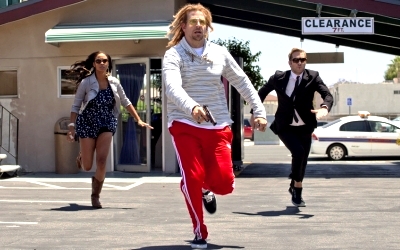 Hit and Run is predictably fast and loud and follows a predictably linear plot that eventually leads to an unfortunately limp and inevitable conclusion. Such stark simplicity means that it flows almost too smoothly, and is totally undeterred by any element of comedic surprise whatsoever. Its unambiguous and straightforward style has the air of a marriage gone stale, and makes for a limp film that lacks punch, and enough of the required laughs to make it live up to the billing of being a ‘fast-paced’ comedy. For the most part though, it’s perhaps a little unfair to slate the overall performances of the film’s cast – they’re generally pretty good across the board, working with a weak script and mostly poor writing.

Had the film held a few good jokes – or even mediocre ones – it would have been a much more enjoyable watch but instead, the writers opted for the lowest common denominator of comedy, shoehorning into scenes clumsy Marshals, ageing nudists and the awkward unfolding of a relationship between the only two gay characters in the movie – because that’s how it happens in real life. Shepard is ultimately likeable as Bronson, whilst real-life partner Bell plays a similar role to those she did circa Forgetting Sarah Marshall (2008)/Couples Retreat (2009).

Support in the shape of Michael Rosenbaum, who has a good spin at playing the over-protective ex-boyfriend, and of course Cooper as criminal Alex Dimistri, help to get Hit and Run through some particularly poor moments, while a constant romanticising of fast cars and their noisy engines will no doubt prove to be the film’s saving grace, as it will no doubt be the only thing keeping audiences awake through Palmer’s unfortunately lacking comedy.