Opening with the fall of Nazi Germany in 1945, Cate Shortland’s brave and expertly handled second feature, Lore (2012), traverses difficult territory with grace and eloquence. As the Allies march on Berlin, Lore (Saskia Rosendahal), a blue-eyed, blond-haired prodigy of the Hitler Youth, is left with the task of getting herself and the surviving members of her family to her grandmother’s house in Hamburg in the wake of her SS parents’ arrest for their involvement in the death camps. Whilst navigating through the Black Forest, avoiding Russian and American troops, Lore encounters a young Jewish survivor, Thomas ( Kai-Peter Malina).

However, our protagonist also realises that if she and her family are to survive, she must cooperate with a man she sees as beneath her. Based on Rachel Seiffert’s Booker Prize-shortlisted novel The Dark Room, Shortland has had a difficult task on her hand creating a sympathetic lead character in Lore – yet this is exactly what she achieves. Despite the character’s bile and anger towards the Jews and her cult-like worship of the recently deceased Führer, it’s immediately apparent that she is a victim of her time and parentage. 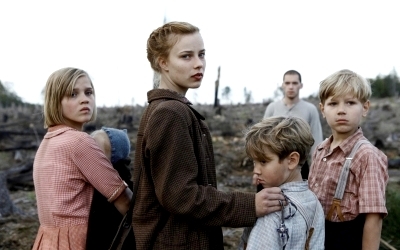 Throughout Australian filmmaker Shortland’s delicate and gripping Lore, there is a unique inversion of attitudes, showing an internal perspective on the immediate fall out at the end of the cataclysmic Second World War as the reality of the atrocities dawns on the nation. Perhaps most disturbing of all is the anger felt by the German populace still ferociously loyal to ingrained Nazi ideologies, utterly convinced that their beloved Third Reich will still prevail. We are led to ask just ‘who is the enemy?’ by the ominous presence of the American and Russian troops, seen not as liberators but as those who tore Germany apart and now to be feared due to the threat of death, rape and imprisonment.

Adam Arkapaw’s rich cinematography provides a beautiful and occasionally ethereal quality to the film. Particularly potent are scenes with the backdrop of the Black Forest which becomes a nightmarish, fairytale world where the innocent play of children is stripped away to become a war front. Accompanying this is an intelligent understanding of filmic grammar by the director that allows the levels of the film to be revealed throughout. However, whilst he tone of the drama is suitably oppressive and tense, the odd moment of relief would have perhaps been welcome.

This minor criticism aside, with Lore, Shortland has created a moving, intriguing and complex film, which provides one of the most intelligent and honest approaches to both Nazism and the holocaust seen on screen in recent years.

This review was originally posted on 13 October, 2012, as part of our London Film Festival coverage.