The Wachowskis have kept things relatively quiet over the last few years, with Speed Racer (2008) their only directorial outing since The Matrix Revolutions (2003). This hiatus has been spent developing Cloud Atlas (2012); since 2008, they’ve muscled their way through funding landmines and huge casting calls and the result is one of the most expensive independent films of all time. Cloud Atlas’ production journey mirrors the extent of their vision, as they team up with Tom Tykwer to adapt David Mitchell’s mammoth sci-fi fantasy novel. The hardest task for a critic will undoubtedly be to analyse Cloud Atlas without using up every sentence on plotting.

The Wachowskis/Tykwer have spliced together six stories which start in the South Pacific in 1849, as American lawyer Adam Ewing (Jim Sturgess) encounters a Moriori slave; in Scotland, 1936, budding musician Robert Frobisher (Ben Whishaw) struggles to write a masterpiece under the tutelage of famous composer Vyvyan Ayrs; investigative journalist Luisa Rey (Halle Berry) uncovers a nuclear reactor crisis in California, 1973; writer and publisher Timothy Cavendish (Jim Broadbent) tries to escape from a nursing home in modern day Britain; a genetically-engineered ‘fabricant’ (Doona Bae), designed to serve fast-food, seeks to liberate herself from the shackles of corporate slavery in 2144; and a tribe member (Tom Hanks) communicates with humans on distant planets in a post-apocalyptic Earth in the year 2321. Out of breath? 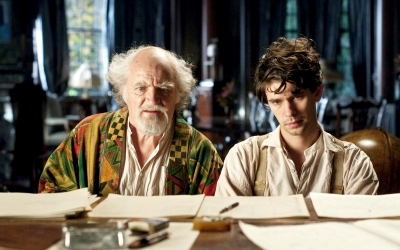 Crediting the actors in traditional parenthesis would be folly in this case, as an illustrious cast from Hanks and Hugo Weaving to Berry and James D’Arcy multi-role. Jim Broadbent and Hugh Grant make the best of it, the former seamlessly hopping between his composer and publisher characters while the latter fits oddly well into his role as a reverend-cum-venture-capitalist. The idea is that the film aligns itself with Mitchell’s original message: experiences of suffering and self-determination are wholly universal. From the slave in 1849 to the 24th century tribes among the dystopian lands of Hawaii, each character seeks emancipation from tyranny or to inform the world of greater injustices taking place on our doorstep.

For all its wisdom and intelligence however, there’s a great sense that the quirks and oddities of the stories are more valuable in the book. The Wachowskis and Tykwer have admirably stitched the eras together based around theme, flicking from period to period in the same way D. W. Griffith did in Intolerance (1916), but there’s just too much ground to cover. It can be immensely cerebral and contemplative but also confusing and hyper-tangential. By telling such diverse tales, the idea is that existential journeys are portrayed as collective, but it’s hard to ever fully engage in each segment. The critique of corporatisation and honour-thy-consumer in the Neo-Seoul era is most profound, but is left unexcavated by the complexity of the whole narrative.

Cloud Atlas is a film with more rewards should you have read the original novel, but as a piece of cinema, it feels as ethereal and evasive as Terrance Malick’s The Tree of Life (2011). The central allusion in the novel is that humanity is definitively predatory and Mitchell’s characters are simple reincarnations of themselves in different contexts. This principle is tough to latch on to in the film and at times can feel elaborate yet dismissive. That being said, all scrutiny matters not since, according to Broadbent’s snobbish Cavendish, “what is a critic but one who reads quickly, arrogantly, but never wisely”.