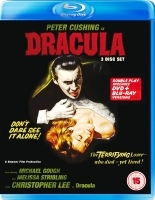 ★★★★☆
Christopher Lee’s portrayal of Bram Stoker’s eponymous vampire has always been considered a staple element of a Hammer Horror diet. His most striking appearance as the blood-sucker is still, to this day, the inaugural one; in Terence Fisher’s Dracula (1958). Although Lee went on to reprise the role in a slew of commercially successful sequels – he played the Count a total of seven times – it’s this initial turn that proved definitive. The film now swoops in with a new triple play release from Lionsgate, featuring 2007’s remaster and an exclusive new version with additional footage incorporated from a Japanese cut.

The story, for those who don’t know it already, sees a British gentleman named Jonathan Harker arrive at the castle of Count Dracula (for the purposes of this film, relocated to Germany rather than his native Transylvania, Romania). Taking a job as the castle librarian, it is soon revealed that Harker’s is there to put an end to the Count’s demonic reign of terror. When Harker’s missions is menacingly cut short, however, his friend and colleague Dr. Van Helsing (Peter Cushing) takes up the quest to rid the world of the undead scourge. 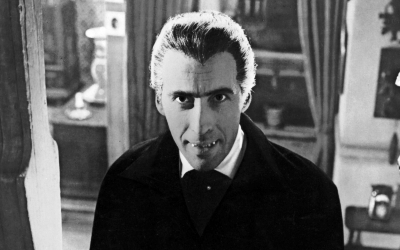 This epochal battle extends out beyond the walls of Castle Dracula and back to the city, where Harker’s fiancée, Lucy Holmwood (Carol Marsh), waits for his safe return, whilst growing more and more frail every day. It soon becomes clear that Dracula has designs for her and along with her brother and sister-in-law, Arthur (Michael Gough) and Mina (Melissa Stribling), Van Helsing is left to defend Lucy against the forces of darkness. A magnificent melodrama with all the stately Gothic charm for which the British studio later became known, Hammer’s Dracula may ride roughshod through Stoker’s original text, but it’s great to see the magnetic ‘Prince of Darkness’ Lee in his most famous role, playing opposite fellow horror icon Cushing.

Whilst it’s as creaky as might be expected, Fisher’s Dracula manages to imbue its blood-sucking tale with more than enough menace to keep it enjoyable. This is also further heightened by the inclusion of material from the long-thought-mythical Japanese cut. This has seen a couple of gory shots, in particular, restored to the original film having been deemed too gruesome for the palettes of British audiences back in the fifties. One of these sees a sunlight-drenched Dracula clawing grotesquely at his own face, bathed in the fire of the Holy Spirit.

A brief documentary within this new triple play package gives some background to the new cut, and the special features also include the making of Fisher’s Dracula, the rerelease and the non-restored reels uncovered in a Japanese museum. All in all, this a fine rerelease of one of Hammer’s most iconic films, and Drac fans will undoubtedly be keen to see the picture with some additional bite in the most definitive version to-date.