Combining comprehensive and contextual research with an exploration into the work of one of cinema’s greatest visual filmmakers, Philippe Maher’s new book Stanley Kubrick at Look Magazine offers an exceptionally in-depth look into how – from 1945 to 1950 – Kubrick’s tenure as a photojournalist for the magazine played a significant role in his approach to directing the twelve subsequent films that brought him such critical acclaim. In the wake of Rodney Ascher’s fascinating doc Room 237 (2012), which pinpointed the various theories that have retrospectively adorned Kubrick’s The Shining (1980), there’s been something of a revaluation of what the auteur truly means to cinema.

Maher here offers something of a biographical delineation of Look Magazine and its constantly shifting modus operandi, whilst interweaving an exhaustively studied through-line that consists of a sociological analysis of Kubrick’s work as a photojournalist, and how his affinity for blending striking imagery with aesthetic and ideological factors eventually stemmed into his approach to storytelling. Working under the tutelage of Arthur Rothstein, the technical director of the magazine’s photography department at the time, Kubrick captured evocative images and photo-essays (which are incorporated here in fine quality, some having rarely been published), which challenged the longstanding dichotomies between photography and film, stasis and motion. 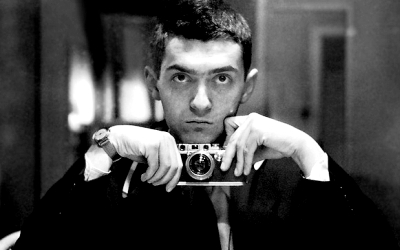 Covering a wide spectrum of his most acclaimed works, Maher highlights how Kubrick’s celebrated techniques such as mirroring, symmetrical composition, the use of deep space and frames within frames contributed to viewer’s understanding of his approach to narrative structure – and also how the real in photography is superimposed by illusion in cinema. Maher begins with a particularly astute parallel of how a 19-year-old Kubrick’s photographs at a Florida circus in 1948 can be seen to inform and foreshadow the ‘Dawn of Man’ sequence in his expressionistic science fiction masterpiece 2001: A Space Odyssey (1968), particularly the focus on gravity-defying chimps and acrobatic circus performers.

The book is divided into two sections that deal with the respective questions of authorship and genre that permeate throughout both Kubrick’s work and his career, elements that have already received considerable critical examination elsewhere. In fact, it is in Maher’s own admission that his book explores a major formative factor in the filmmaker’s career – something relatively unmentioned by existing and extensive critical literature – that the stimulating content here really emanates.

While Stanley Kubrick at Look Magazine is considerably detailed and at times broad, it is fervently written and researched, and uncovers the sources of the ‘Kubrickian worldview’ whose origins have seldom been studied, nor particularly established. As Maher concedes, this is a perceptible study into what Kubrick himself describes as something of an apprenticeship before making his eventual ascension to becoming one of the greatest filmmakers of all time.

Stanley Kubrick at Look Magazine is available to own now, courtesy of Intellect Books.