Penny Woolcock’s One Mile Away (2012) was the first documentary ever to be awarded the Michael Powell Award at the Edinburgh International Film Festival back in 2012 – and it’s easy to see why. Woolcock hired a host of non-actors from Birmingham, including Burger gang member Dylan Duffus, for her 2009 fiction film 1 Day, and the pair remained friends after the film was completed. Aware of this friendship, a member of the opposing Johnsons gang, Shabba, called Woolcock and asked her to arrange a meeting with Dylan. One Mile Away follows the efforts of Dylan and Shabba as they attempt to bring about a truce in their community. 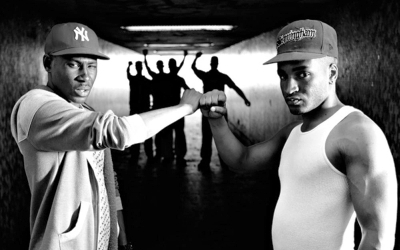 Gang activity in Birmingham has escalated to a record high, with members on either side refusing to even sit down together. However, during the 2011 London riots, a new perspective emerged which acts as a catalyst for the most striking attitude shift the community has seen for some time. Having previously shown great skill in directing opera, Woolcock intercuts Dylan and Shabba’s plight with musical sequences featuring grime music written and recorded by rival gang members in a peaceful session at the end of the process.

The unique origins of One Mile Away, combined with these musical segments, demonstrates the fundamental connection between the subject matter and film itself. This link elevates Woolcock’s doc to unusual heights, and explores the remarkable power of the form without ever diverting from the events at hand. Fast-paced and slickly-edited, the film is accessible yet never patronising. Touching on many possible contributing factors to the situation – from education and racism to capitalism and government corruption – it subtly explores these issues through the actions and words of its participants, rather than any exterior authorities.

Though it could always be argued that film is inherently manipulative, One Mile Away feels extremely carefully observed, and does its very best to avoid any such accusations; Woolcock offers an alternative perspective on gang culture to that propagated by the mainstream media. Starkly contrasting the anger and frustration of gang members with the damning words of current PM David Cameron, Woolcock’s latest refuses to accept an oversimplification of the situation – and demands that the audience do the same.