In the seminal days of Disney Pixar’s past, there was a tendency to really pull on the strings of the quest narrative; toys were on a mission to escape from the box, bugs weren’t happy with their humdrum lives on the anthill, monsters were tired of being scary. But with Andrew Stanton’s and Lee Unkrich’s Finding Nemo (2003), and Pixar’s fifth outing, the quest genre was taken to its limits: a cross-continental, jet-stream surfing rescue operation writ large in the depths of the deep blue sea. Firmly in line with other epic films, Finding Nemo refers to the eponymous character’s attempts to ‘find’ himself at a time of pre-adolescence. 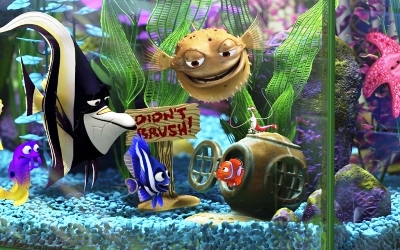 Showing off to some classmates who wander off from the school, Nemo (Alexander Gould) drifts out from the safety of the coral into the dangerous and unknown waters of the ocean. Captured by a nearby scuba-diver, Nemo is hauled away to the horror of his dad Marlin (Albert Brooks). Fortunately for audiences, this brought about perhaps one of the greatest couplings in Pixar’s history – the joint venture of Marlin and a scatterbrained regal blue tang called Dory (Ellen DeGeneres) who team up to save Nemo.

Unlike previous Pixar outings, there are no great advances in computer-animation here. Underwater animation is relatively straightforward for today’s designers and fish are far less complicated to manufacture than human beings. This meant Stanton and Unkrich had quite a job on their hands; they couldn’t wow viewers with revolutionary visuals, so instead had to nurture this tale of heartache and voyage, unravelling it with the love and compassion Pixar are now celebrated for. If the pair do wander into some soapier sentiments towards the end of the film, they can be forgiven for the adventure they take us on. Yet, Nemo’s financial and cinematic accolades support the claim that this was a feature to rival even the ingenuity of Toy Story (1999).

This is fundamentally a tale of self-discovery and coming-of-age, wrapped in the dark tragedy and fear of losing a child. Audiences are able to resonate with both father and son in a way which is traditionally thorny and underexposed in filmmaking. Pixar’s ability to deliver timeless storytelling was ennobled with the production of Finding Nemo, and crowned the studio’s five-film anniversary with one of the most affectionate and triumphant animated movies of all time.