If you enjoy obscure Dutch films about obscure Dutch crimes, then 21 Days: The Heineken Kidnapping (2011) may well refresh the parts other thrillers simply can’t reach. For many, however, the weak third act and cast of dislikeable characters could encourage you to file the DVD in the ‘never watch again’ section of your obsessively, compulsively categorised collection. The legendary Rutger Hauer plays Alfred Heineken, the president and major stockholder of the renowned Heineken International brewing company. Alfred is kidnapped and held to ransom by a gang of professional criminals who keep him incarcerated for – you guessed it – 21 days. 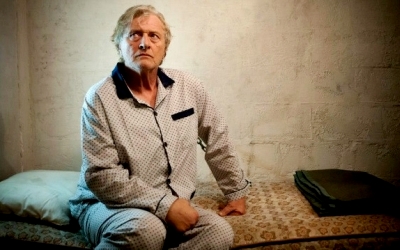 The major problem with director Maarten Treurniet’s piece is that the story itself is not infamous outside of mainland Europe. Viewers of a certain age might recall the kidnapping, but most folks below the age of 30 will be strangers to the events. This wouldn’t be so much of a problem if it was a spectacular narrative full of twists and tension, but whilst the set-up is intriguing and there are a few moments of genuine drama – particularly when then kidnappers make their move – the middle act featuring Heineken locked up (behind a false wall) falls flat.

There are attempts at suspense as Alfred runs out of oxygen due to a faulty fan (!?), but you always know that he’s going to get out of there alive. There is also a hint that Treurniet is trying to make a comment about class: namely, the rich’s fear of the poor and how powerful figures can manipulate the law to suit their own ends. Yet, this would have been more effective if we had an insight into how the Dutch public reacted to the kidnapping. Were they rooting for the wealthy Heineken, or the working-class kidnappers? In fact, the events are so insular they may as well be happening on another planet.

Hauer seems to be doing a fine job, but with no idea what Heineken was like in reality, you’re never quite sure if his world-weariness is intentional or just a sign of lacklustre intent. The same goes for the main antagonist, Rem (Reinout Scholten van Aschat), who is portrayed as being little more than an unlikeable asshole. There is – reputedly – another film in the works based on the same story, so maybe there is potential for a more interesting take. Until then, 21 Days: The Heineken Kidnapping is only worth picking up if you’re a die hard fan of underwhelming thrillers.