Comedown (2012), the new British indie horror from Kidulthood director Menhaj Huda, starring Jacob Anderson, Sophie Stuckey and Adam Deacon, is reminiscent (one imagines) of a bad trip – minus any of the accompanying highs. A group of teenagers including Lloyd (Anderson) and his pregnant girlfriend Jemma (Stuckey) decide to break into the block of flats in which they used to live but that now lie derelict, in order to help set up a pirate radio station and have a little ‘fun’ in the process. However, there is someone else prowling the neon lit corridors of the tower block – someone intent on cutting the kid’s party dead, permanently.

From a technical standpoint, Huda’s Comedown is surprisingly competent. Atmospherically shot, the film wonderfully captures the urban decay of the estates and streets surrounding the network of railways that criss-cross South London. The sense of claustrophobia established after the teens eventually enter the abandoned tower block is effectively maintained with good use made of the murkily-lit stairwells and graffiti daubed lifts and corridors. 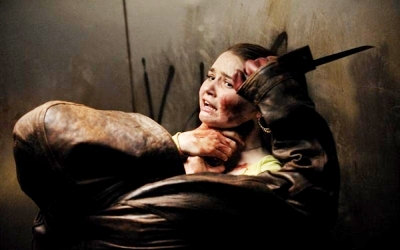 The murders, when they do kick-in, are relentless in their intensity, achieving a suitably grimy realism and leaving the viewer (almost) feeling sympathy for the victims as their desperation and horror escalates – an empathy often lacking with characters in modern horror films. Though you’re a good half-hour into Comedown before any of the teenagers are dispatched, when they are the methods used to bump them off are effectively gruesome with everything from a nail-gun peppered face, a la Hellraiser’s Pinhead, to a suitably toe-curling head first descent down a waste-disposal shaft. Sadly, these factors are ultimately wasted in what amounts to 30 minutes of boredom, followed by an hour of relentless torture porn.

An interview in the disc’s extras with Comedown’s writer Steven Kendall (who also penned the abysmal 2003 thriller Capital Punishment), highlights the film’s basic problem. Explaining his approach to working on Comedown, Kendall seems under the misconception that expletive-ridden dialogue and a threadbare story involving teenage delinquents hanging about the streets of South London and dealing in drugs before breaking into an derelict tower-block, makes for a gripping and involving narrative.