In Bernard Rose’s Boxing Day (2012), Danny Huston plays Basil, a business man living on the low end of venture capitalism. His credit cards are maxed-out and his affluent lifestyle is at risk. In a bid to get back on the front foot and funded via a shady procurement of a local church’s charity fund, the day after Christmas Basil abandons his family home and heads from LA to snowy Colorado to buy up properties on which the banks are due to foreclose, hoping to then sell them off and make a tidy profit. Picking him up from the airport is an English chauffeur Nick (Matthew Jacobs), himself a touchy and damaged individual. 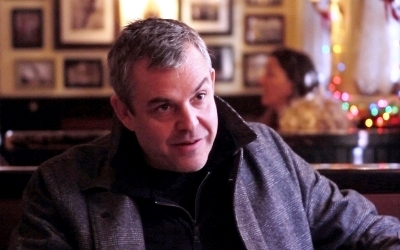 As they negotiate an increasingly treacherous wintry landscape, the two men squabble, joke and bicker about the virtues or otherwise of capitalism, power relationships and barbecue flavoured potato chips. Based on Tolstoy’s Master and Man, Boxing Day is Rose’s third film in a series of modern day interpretations of the Russian master’s work – Ivansxtc (2000) and The Kreutzer Sonata (2008) being the other two – and is miles away from the schlock delights of his 1992 horror film Candyman.

A two-handed character piece, the film is an acerbic road movie, not a million miles from the likes of Planes, Trains and Automobiles (1987), as the business man and his driver negotiate icy driveways and roadside saloons. The two men are both in trouble. Basil has money worries and the darting eyes of someone who knows that bankruptcy could be round the corner. Nick is a tight twist of neuroses, barely concealed fury and a recovering alcoholic to boot. Neither man is wholly sympathetic: Nick is hapless and graceless and Basil is sleazy, self-satisfied and unscrupulous. Although Basil has the advantages and trappings of success, they are both ultimately threatened by a crisis which is as much existential as economic.

The performances of Huston and Jacobs are excellent, perfectly weighted and keeping the characters real without ever descending into mere grotesquery. The occasional break in the bickering allows for some rare moments of shared humour and – without ever descending into the banalities of chalk and cheese buddy clichés – Basil and Nick do seem to learn something from each other. Rose astonishingly manages to retain an obsidian wit throughout, as Boxing Day heads for a conclusion that is at once tragic and unsentimentally triumphant.