Teen sex comedies are ten a penny these days, with 1999’s American Pie giving birth to more than a decade’s worth of cheap imitations. Whilst popular amongst cinemagoers of both sexes, the sub-genre remains predominantly male-driven, culminating in a sticky mess of prepubescent high jinx. Jannicke Systad Jacobsen’s feature debut, Turn Me On, Goddammit (Få meg på, for faen, 2011), confronts this double standard, culminating in an appealingly unabashed examination of female sexual awakening. Our focus is on Alma (Helene Bergsholm) who, like her friends, shares little affection for her sleepy Norwegian hometown. 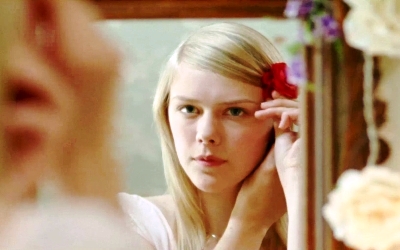 In the film’s leading role, Bergsholm is an immediately likeable and captivating star who through her frank and fearless performance creates an intelligent and endearing protagonist for the audience to observe. Dealing with such awkward truths and embarrassing moments of self-gratification, Bergsholm never appears uncomfortable in the role, with Turn Me On, Goddammit benefiting hugely from this unabashed and valiant approach. Jacobsen imbues this jovial erotic voyage of discovery and sexual awakening with plenty of humour and implied fantasy that thankfully assists Bergsholm in this ostensibly challenging role. Fortunately, this lighthearted approach never allows Alma’s humiliation to escalate to the unwatchable.

Unique for its feminine perspective on burgeoning sexuality, this blunt and unequivocally frank rites of passage tale successfully manages to traverse provocation and camp comedy in exchange for a charming and unobtrusive focus that combines Scandinavian filmmaking techniques with a more breezy Western approach. With little pretence this brazen black comedy inverts the usual stereotype of sexually charged women as obsessive psychopaths of immoral sluts and creates an all-together more realistic representation of the fairer sex.

Turn Me On, Goddammit, does exactly what it sets out to do; namely, presenting a lighthearted and darkly comic perspective of female sexual awakening in a predominantly male orientated genre. However, whilst its amusing observations are noticeably unique and refreshing they’re never quite illuminating enough to turn this refreshing comic drama into anything more substantial. Regardless of its deficiency of any sociopolitical punch, Jacobsen’s fictional debut remains a brilliantly enjoyable portrayal of misunderstood youth and the comedic humiliation of sexual discovery.

Turn Me On, Goddammit is available to own now on DVD. Order from Amazon here.