The debut directorial effort from Alex Kurtzman, one half of the Hollywood scriptwriting powerhouse behind J. J. Abrams’ recent Star Trek reboot and many other high-profile genre works (his co-scribe, Roberto Orci, is also credited as one of the authors here), 2012’s People Like Us claims to be ‘inspired by true events’. Unfortunately, it all feels like it’s been gleaned via ‘Scriptwriting 101’, and rarely does anything about the characters and their worlds resonant in a realistic and truthful way. Chris Pine is Sam, a corporate hotshot and self-proclaimed ‘facilitator’, whose life comes crashing down around him when a business deal goes horribly awry. 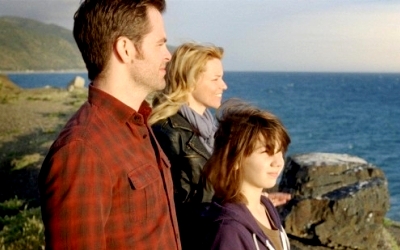 To make matters worse still, Sam’s estranged music-producer father has recently passed away, leaving him next to nothing in the will. What’s more, he’s presented with a box containing $150,000 and a request to deliver it to a teenage boy whose mother (Elizabeth Banks) is his dad’s unknown and illegitimate daughter (keeping up?). Decamping to the East Coast to stay with his mother (an underused Michelle Pfeiffer), Sam is caught in a moral quandary as to whether to keep the money, or pass it on to its rightful owner. This indecision is further tested when he strikes up a friendship with his long-lost sister and nephew, both of whom are unaware of the true identity of this new benevolent presence in their lives.

Despite committed performances from the two leads (particularly the ever-wonderful Banks), People Like Us never comes together in a believable way. Character arcs and motivations are clearly telegraphed throughout to ensure the requisite emotional beats are delivered in the right places, and the whole thing grows increasingly predictable and implausible, right up until the mawkish mini-twist of an ending. Banks is a recovering alcoholic, yet she works as a barmaid and lives in a nice, roomy apartment with her precocious 11-year-old, who is required to deliver the kind of perceptive and arch dialogue which sounds like he’s just stepped off the set of a Dawson’s Creek rehash.

Kurtzman’s workmanlike direction isn’t enough to elevate the material, and that bohemian, sun-kissed Californian milieu Sam grew up around was captured in a much more astute and eloquent manner in Lisa Cholodenko’s 2002 feature, Laurel Canyon. Kurtzman was clearly aiming to produce a polished contemporary mainstream drama, but the end results fall somewhat short of this. Given the wealth of A-list talent he has at his disposal (Jon Favreau, Mark Duplass, Olivia Wilde and Philip Baker Hall also make appearances here), it’s even more of a disappointment that People Like Us is such an inert experience.