The found footage format has proved a success within the horror genre, resulting in the box office success of films such as The Blair Witch Project (1999) and the Paranormal Activity cycle. Capitalising on productive associations with the latter comes Barry Levinson’s blood-sucking satire The Bay (2012). Drawing together alternate perspectives, the film explores the rapid mutation of the deadly Cymothoa Exigua parasite and the advancement of a plague on some unsuspecting, camera-wielding residents and holidaymakers. On Maryland’s Eastern Shore, two oceanographers discover a dangerous level of toxicity in the sea that’s killing off marine life in droves.

The town’s authority figure, Mayor John Stockman (Frank Deal), refuses to acknowledge the findings for fear of it affecting the seasonal success and reputation of his bustling seaside resort (see 1975’s Jaws). Unfortunately, the town is soon propelled into chaos when news of a suspected bacterial outbreak spreads and one-by-one, people become infected. News reporter Donna Thompson (Kether Donohue) and her cameraman are in town to report on Independence Day festivities, but get more out of their footage than they bargained for when entrants to the crab-eating contest begin vomiting and blood-covered tourists start biting off their own tongues. 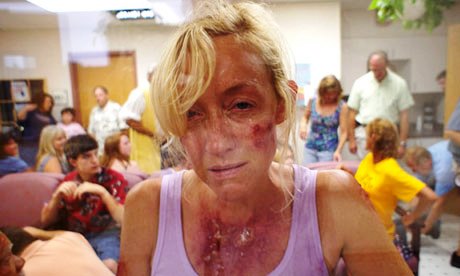 As the town degenerates, Alex (Will Rogers) and Stephanie (Kristen Connolly), a young couple with a baby, return from a romantic boat-trip only to find the streets strewn with bodies and the 4th of July celebrations suddenly escalated into a disaster of monstrous proportions. Initially, Levinson’s tremulous hand-held camerawork and sharp cuts are hard to stomach, but that soon comes to pass due to the conviction of the director and authenticity of the format. Post-9/11, there’s a macabre fascination with the realism of a self-made disaster movie and Levinson exploits that to a degree by ensuring that, as in any real-life documentary, the disaster itself is The Bay’s protagonist/antagonist all rolled into one.

Donohue’s Donna delivers a hindsight narrative of events to camera throughout but her focus is solely on the events of that day and little is revealed of her character, other than she’s alive and well. The oceanographers, one of whom is Argo’s Christopher Denham, are used solely to educate the viewer on the scientific evidence. Their four-week-old findings are interwoven with current events by way of Skype calls, Facetime, CCTV, mobile phones, 911 calls and digital cameras that each provides a steadily developing increase in tension as the town deteriorates at a rapid and thoroughly engrossing pace. The scares are sporadic but on the whole predictable. For gore fans though, there’s also flesh-eating in abundance.

The most frightening aspect of The Bay continues to be the horror of its overall subject matter. Whilst Levinson’s film does fail to cover new ground, it is masterfully constructed, convincingly performed and altogether refreshing to see that a film packed full of primitive and grainy rushes can still deliver in an age of HD-obsessed cinema. As found footage films go, it’s certainly not as thrilling as Cloverfield (2008) or as terrifying as [Rec] (2007), but at just 85 minutes, it’s short, sticky and sick enough to crawl under your skin.