A cursory glance at David Ayer’s filmography will reveal his propensity for cop dramas, with previous work including such titles as 2001’s Training Day (for which he wrote the screenplay) and 2008’s Street Kings. The American director was back on the beat again last year for his latest flick, End of Watch (2012), a gritty action-thriller set in Los Angeles which owes much to two exceptional central performances. Our protagonists this time around are Officers Brian Taylor (Jake Gyllenhaal) and Mike Zavala (Michael Peña), partners and best buds who are duty-bound protect and serve the citizens of the ‘City of Angels’. 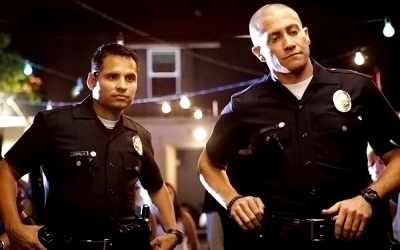 When an everyday traffic stop leads to the discovery weapons and drug money that point towards a Mexican cartel, Taylor decides to continue investigating, and the two cops soon find themselves a target. As we live and breathe the officers’ lives, End of Watch maintains a distinctly authentic feel throughout. It’s explained early on that Taylor is using a digital camera to document his life on patrol for his film class, and through this device Ayer grants us a front-row view of LA’s treacherous streets.

Just as the officers’ wives (played efficiently by Anna Kendrick and Natalie Martinez) live with the fear that their husbands might not make it home, it won’t take long for viewers to become uncertain whether Taylor and Zavala will live through the movie. From human trafficking to abused children, there are plenty of frightening horrors exposed in End of Watch. However, Ayer’s use of the shaky cam is not always effective; although it is perfect for portraying the tense and frenetic atmosphere our heroes often find themselves in, the trade-off is that the action is hard to follow at times. That the director uses a jarring mix of traditional third-person camera and found footage does not help matters, and there are times when the jittery format is completely unnecessary.

Fortunately, by the time we get to the film’s climatic moments, we care for Taylor and Zavala’s well-being, and that is largely due to Gyllenhaal and Peña’s infallible performances. Whether the characters are engaging in humorous banter or exchanging their hopes and fears, their camaraderie is brilliant to watch. It is a good thing too, as Ayer’s script devotes a substantial amount of the film’s running time to exploring the relationship. The result is less an action-thriller movie and more a piercing character study. Training Day remains Ayer’s best work, but End of Watch adds another enjoyable, if flawed notch to the director’s growing list of credits.

This review was originally posted on 11 October, 2012, to coincide with the BFI London Film Festival.

Win a copy of End of Watch on Blu-ray with our latest competition. Follow this link to enter.