Film Review: ‘In the House’

The refined, if slightly aloof new offering from French director François Ozon, In the House (Dans la maison, 2012) initially impresses thanks to its central triumvirate and jigsaw-style narrative, before petering out disappointingly as it approaches its convoluted conclusion. Fabrice Luchini, Ernst Umhauer and demi-Brit Kristin Scott Thomas all put in fine turns in their respective roles – ranging from the befuddled to the Machiavellian – but Ozon’s knowing study into the nature of storytelling does eventually get the better of itself, capitulating into a rather familiar battle of wits between a neurotic teacher and his cocksure student. 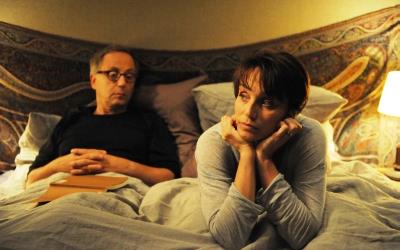 We begin with Luchini’s wily tutor Germain returning to college following the summer break. In one of his French lessons is 16-year-old Claude (Umhauer), a quiet, reserved individual with a clear talent for the written word. However, Luchini quickly becomes troubled by Claude’s submitted prose, which goes into explicit detail about his newfound friendship with classmate Rapha (Bastien Ughetto), as well as his gradual, cuckoo-like ingratiation into the boy’s family unit. Unnerved by what he’s compelled to read, yet unwilling to completely extinguish Claude’s creative energy, the inquisitive Germain and wife Jeanne (Scott Thomas) become passive voyeurs, unaware of how intertwined their lives are soon to become.

For better or worse, an air of condescension permeates throughout In the House, in both the way the typically middle-class Germain looks down upon his unimaginative students (who only seem to write of pizza and television), and also in how Claude coldly assesses the slow-witted, yet familially-blessed Rapha. For the most part, Ozon pulls off this satirical stance with grace and poise, questioning Germain every step of the way; Scott Thomas’ Jeanne is the ignored, neglected voice of reason, struggling to make a success of her fledgling art gallery. The morality of Claude and Germain’s dubious actions are also given generous credence, and at its best, Ozon’s latest functions like a Rear Window-esque Hitchcockian comedy-thriller; light enough to keep one entertained, yet dark enough to alarm.

Frustratingly, In the House’s good work is soured somewhat by a divisive, whimpering finale (due, perhaps, to the Juan Mayorga stage play it’s based on) that seems to suggest that neither party has truly learnt from the errors of the past. As a dishevelled Germain and smirking Claude gaze upon a lavish Norman apartment block, residents spilling out onto the screen like an arthouse interpretation of The Hollywood Squares, it’s clear that compulsive voyeurism has transformed into a treacherous addiction for both master and apprentice. Ozon’s latest puzzle is certainly sharp as a tack, but lacks the dénouement to compete with its extremely watchable exposition et tournant.