Have you ever wondered what you might come up with if you dared to blend 1980’s thriller The Long Good Friday with High Fidelity (2000)? You probably haven’t, but rest assured that Good Vibrations (2012) would almost certainly be the result. Lisa Barros D’Sa and Glenn Leyburn (Cherrybomb) bring us a biopic of Terri Hooley, an integral factor in the rising punk-rock scene of 1970s Belfast, finding hope and inspiration against the backdrop of the Northern Irish Troubles. Labelled the ‘Godfather of Punk’, Hooley (Richard Dormer) has little care in life for anything but music, causing conflict with his long-suffering wife Ruth (Jodie Whittaker). 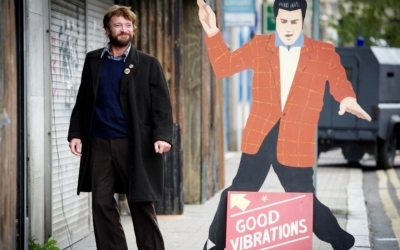 Disregarding both domestic and civic issues, Hooley focuses on opening up his record store, the titular ‘Good Vibrations’, hoping to bring joy and security to the locals during this precarious time. Hooley then witnesses the arrival of punk bands such as The Outcasts and The Undertones, and having signed them up to his self-made record label, he embarks on a journey that is set to change his life for good, though whether this exciting new world is of benefit to those who are close to Terri, is another matter entirely. Although appearing as your conventional biopic, Good Vibrations has an edge to it given the warzone in which it is set, adding a tumultuous, taut atmosphere to an otherwise conventional narrative.

D’Sa and Leyburn deal with the more serious aspects well, with a delicate craft and poignancy as they implement genuine footage, adding to the authenticity of the piece. Handling such an emotive subject matter through the music that inspired a generation is compelling and effective, with a reggae and punk soundtrack complementing the piece perfectly. Dormer is fantastic as our lead, playing Hooley with an innocent, inherent optimism that is infectious and increasingly endearing. He wears his heart on his sleeve and whether he likes or dislikes something, he is equally impassioned in his response. As a result the audience are enthralled when things go well for him.

The filmmakers don’t completely shy away from portraying Hooley’s destructive, often selfish nature, and by witnessing his flaws – in particular, the neglect of his wife as he prioritises his music – we’re able to at least partly believe that Good Vibrations is an honest portrayal of events. D’Sa and Leyburn’s good-natured drama is a heartwarmer for sure, managing to capture the essence and spirit of a memorable moment in music history with the minimum of contrivance.