Originally populated by Polish settlers, the rural villages of Masuria were aggressively Germanised in the half-century leading up to the advent of World War II, which ultimately led to them being considered as one of the most loyal regions to the Fatherland. Their ethnic autonomy was largely stamped out during this period, and was utterly eradicated as the province was enveloped back into Poland after the Second World War had ended. This particularly difficult post-war period is the focus of Wojciech Smarzowski’s harrowing drama Rose (Róza, 2011), which follows the fortunes (or lack thereof) of a specific homestead during this time of upheaval.

Polish soldier Tadeusz (Marcin Dorocinski) somehow manages to survive the Warsaw Uprising and flees the city, a widower. He enters a hard-hit Masurian township, concealing his identity, and arrives on the farm of the eponymous Róza (Agata Kulesza) with a photograph from her deceased husband. He was a German soldier, and life on the farm has been especially traumatic since the war ended; Russians and Poles alike have taken pleasure in their revenge against the Nazi supporting Masurians. Tadeusz stays on the farm with Róza and their existence becomes one of surviving raids from Russian bandits intent on raping and pillaging. 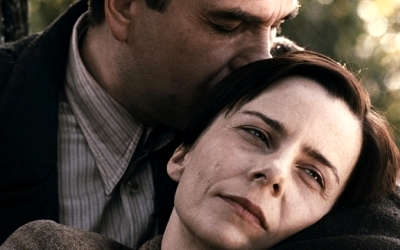 Rose is by no means an easy watch. Life has seen our fragile female protagonist subjugated to horrific abuse and humiliation at the hands of various conquering armies, and her body has suffered terribly as a consequence. As a tender romance threatens to blossom between the stoic soldier and evermore albescent Róza, her health deteriorates dramatically due to the miscarriage of an unwanted child. The Communist rule of Poland, meanwhile, is keen on a homogeneous population; if Germans do not sign the appropriate paperwork and declare themselves Poles, they will be deported. The increasingly present Polish army unleash hellions throughout the snow-laden locale to terrorise people into compliance or flight.

Smarzowski’s film is full of fine and worthy performances, particularly from Dorocinski and Kuleska, and explores a murky area of Polish history. This is a film about the end of the Second World War in which the film’s most sympathetic character is almost elegiac about the Nazis; recalling how well she was treated by the Germans. This is a Poland where it is the Poles and the Russians (or perhaps, more pertinently, ‘the victors’) that are committing the despicable acts.

Smarzowski maintains narrative engagement throughout, but the impact of Rose – and in particular, its conclusion – is muted by the unrelenting grimness. The muddy brown palette and never-ending agony serve to extinguish all glimmers of hope and although it is not that the finale is necessarily negative, neither could it be described as positive. Whilst it absolutely makes for an enthralling watch, more variation in tone, however, would have significantly heightened its overall power.