Intellectual Polish director Wojciech Marcezewski was no stranger to his country’s censors, and exploited this to the full in his absurdist comedy, Escape From the ‘Liberty’ Cinema (Ucieczka z kina ‘Wolnosc’, 1990). A film that featured in the Un Certain Regard selection at the 1991 Cannes Film Festival, it was recently screened at London’s Barbican Centre as part of the 11th Kinoteka Polish Film Festival. One of three classics to be rereleased for the festival, it’s an exceptional satire set just prior to the fall of the communist regime and combines surreal humour and cinematic allusions in its support of artistic freedom.

Janusz Gajos plays a failed poet and literary critic that has wound up a lonely district censor, suffering from headaches and a weak heart. He’s already having a stressful day when news reaches him that an actor in a screening of the film ‘Daybreak’ at his local cinema is rebelling. Spewing whatever comes to mind – including complaints about the shoddy quality of the script or gaffs in the casting – the impromptu performances begin to draw the crowds; to the natural chagrin of the those who control what art the people may ingest. 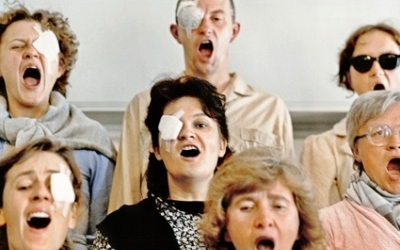 Beginning its life as a cleverly reflective comedy-of-sorts, Escape From the ‘Liberty’ Cinema’s opening is an inventive, cinematic treat. The wonderful Gajos imbues his ‘Cenzor’ with a perfectly judged weariness, whilst still clinging to the vestiges of hope that his profession itself has some artistic merit. As he starts to converse with the characters on screen – or the actors, who can say – they delve deeper into his subconscious self-loathing. Despite the runaway film no longer being available for public consumption, the silver screen revolution inspires people to break free. It also brings the unwelcome attention of a group of stern government officials determined to quell the presumed anarchy.

Gajos is surrounded by a suitably impressive supporting cast both on the screen and off it; from the moribund reflections of Malgorzata (Teresa Marczewska) on the celluloid to the revelations of those encountering this subversive improvised film. Gajos’ journey is not just one of self-liberation but an examination of the very nature of censorship, with references and asides that will reward repeat viewings. The protagonist’s final gesture is as rousing and liberating as any such stance should be without allowing him to shirk responsibility for his own prior offences.

Escape From the ‘Liberty’ Cinema is as complex as a discourse on censorship is always likely to be and is filled with wonderful moments with straight laughs and dark irony. Marcezewski’s film may begin as a quirky and imaginative comedy, but it morphs seamlessly into a meaningful political satire and climaxes as a timeless and disarmingly moving condemnation of censorship.