The second of the renowned collaborations between director Joseph Losey and playwright turned screenwriter Harold Pinter is an intense psychological drama that arrives with one hell of a bang. Accident (1967) centres on Stephen (Dirk Bogarde), an Oxford don who from the outside, appears happily married to Rosalind (Vivien Merchant). Beneath his cool exterior Stephen feels his emotions and academic intelligence are deteriorating when pitted against students of a higher social order. His colleague Charley (Stanley Baker) causes Stephen great resentment due to his youthful appeal and sexual gallantry. 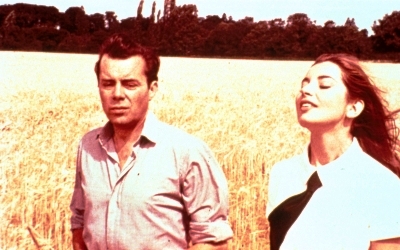 In handling his feelings, Stephen becomes somewhat dependent on alcohol. During one dark night a fatal car crash occurs directly before Stephen’s house. Rushing to the aid of the victims, Stephen is mortified to discover that the crash has killed one of his aristocratic students, William (Michael York). The survivor is William’s fiancée Anna (Jacqueline Sassard), a woman whom Stephen has dreamt of an affair with. Told in flashback over one steaming hot summer the finer details in the relationship between the don and his students are explored seeing Stephen’s sexual frustrations rise to boiling point.

Overtly ambitious in concept, Losey and Pinter’s second collaboration plays on the strengths of their first, The Servant (1963), and explores the darker side of human emotions. Although character driven, Accident doesn’t rely so much on rhythmic dialogue to move things forward. Instead Losey focuses on structure, tender moments of silence and the electric tactility of the characters against a backdrop of summer greens and classic architecture. In doing so the audience is able to witness these characters develop organically in almost voyeuristic circumstances. When Stephen seduces old flame Francesca (Delphine Seyrig), a series of interconnected scenes create the composition.

Bogarde is utterly incredible as the tortured don, not only does he make Stephen’s journey compelling but he has that rare ability to make the audience simultaneously experience the anxieties of his character. York, meanwhile, oozes charisma in a captivating screen debut and the enigmatic Anna is performed exquisitely by the stoic yet seductive charms of Jacqueline Sassard who ultimately becomes the real victim of the tragedy. Accident’s screenplay and skilfully constructed visuals work harmoniously to create a powerful and meritorious masterpiece. Intelligent, passionate and perfectly realised, this is one accident that deserves many a witness.