Controversial and legendary playwright Joe Orton is responsible for bringing us Loot (1970), for providing the source material for Gary Oldman’s astounding performance in Prick Up Your Ears (1987) and for creating Entertaining Mr. Sloane (1970), a wonderfully colourful black comedy about manipulation and sexual repression. Through the directorial eye of Douglas Hickox, the themes of sadism, homosexuality, nymphomania and murder are explored in this wild tale of a charismatic young man named Sloane (Peter McEnery) and the startling affect he has on siblings – Kath (Beryl Reid) and Ed (Harry Andrews). 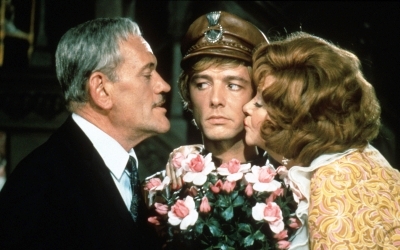 After spotting him exercising, Kath introduces herself to young Sloane and invites him to board in her family abode. Sloane settles into his new home and plays along with the flirtations of his rampant landlady for his own benefit. Their fun appears to be over when Kath’s prim and proper brother Ed arrives at the chapel in his pink wagon. However, startled by the sight of the barely dressed lodger, Ed begins to take a shine to him and turns the conversation to girls, the anatomy and the feel of leather against naked flesh. Sibling rivalry ensues over the affections of the young man and as Kath and Ed compete, their father becomes increasingly concerned and accuses Sloane of being involved in an old, unsolved murder.

Dialogue flows through Entertaining Mr. Sloane like poetry. It’s sharp, biting, deliciously camp and at times hilarious. Beryl Reid embraces her idiosyncratic character and plays her out with wild abandon and punctual comedic timing. She flaunts her sexuality before a funeral ceremony in a garish, see-through chiffon dress and in an intimate close-up, sucks on a popsicle as the dead is laid to rest. Her physicality is almost childlike in movement as she flaunts before the young man. Reid’s ability to portray her character so flagrantly, yet still display the flaws that make her such a way is remarkable. Orton’s rhetoric flow and Hickox’s persistent lightheartedness fail to dwell on tragedy and ensure the whole film is sugar-coated with sharp effervescent wit.

Hickox’s framing of body parts, close ups and the manipulation of sound to heighten feeling, all add heat to the hopeless lust of Andrews and McEnery’s demonstration of repressed sexuality. While Sloane and Ed partake in flirtatious repartee and the colloquy is exceptionally camp, both actors succeed in ensuring their roles never slip into Carry On-style stereotypes. Hickox’s Entertaining Mr. Sloane ostensibly dark and perverse tale is in fact a wild and riotous bundle of fun that’s unashamedly gay in every sense of the word.