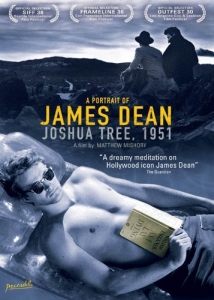 Sumptuous looks and an enticing central subject may be enough to attract audiences to Matthew Mishory’s A Portrait Of James Dean: Joshua Tree, 1951, but what it possesses in visual beauty, it sadly lacks in substance. Opening oddly to a prologue involving poet Arthur Rimbaud, we are quickly transported to 1950s LA where we meet undergrad James Dean at UCLA. James Preston plays the legendary (yet short-lived) screen star and certainly has the looks of the doomed Hollywood icon, sporting wavy curls and thick-rimmed Ray-Ban wayfarers, capturing an enjoyable level of petulance, with his languished looks.

We see Dean interact with fellow students in acting classes overseen by his theatre professor (David Pevsnor), drunken sex-scenes with other young men and scenes of him hanging by the pool, topping up his tan with predatory agent Roger (Edward Singletary) at his side. This is accompanied by the odd scene in the desert at Joshua Tree, where Dean liked to retreat to. With this pseudo-biopic, Mishory is less concerned with historical fact than creating a portrait that attempts to capture all that is and might have been Dean. This is a potentially interesting premise, exploring the man, the myth and the conjecture. 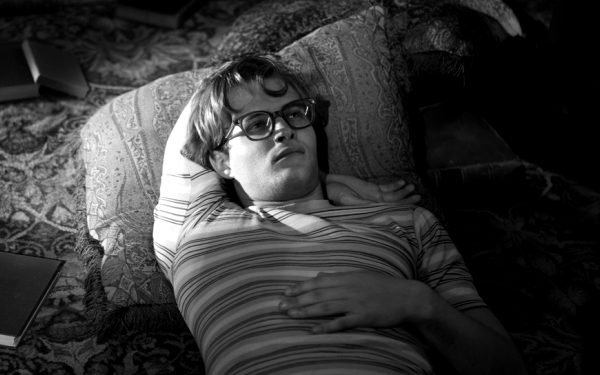 There are rumours of Dean’s promiscuity with both sexes, and the film explores some of these including the reported sexual relationship with screenwriter William Bast, (renamed simply The Roommate) with whom he shared a room with at college. Whilst this experiment in Hollywood biographical history suggests promise, Mishory makes the fatal flaw of being overly concerned with subtext and theme, allowing the narrative falls by the wayside. This leads to the artful looking biopic becoming more of an unsatisfying pastiche of good-looking Calvin Klein ads, laced with handsome half dressed men and buxom topless women parading around various Hollywood haunts and little else.

Perhaps this wouldn’t be so much of a problem if what we received with A Portrait Of James Dean was an interesting and engaging exploration of the concepts that clearly fascinate the director. Instead, we get a weak attempt at the deconstruction of the Dean as a masculine icon, that fumbles and meanders around the topic, clearly lost by concerns of wondering with the lens that has been greased properly and whether that shot of a buttock is artful enough. Dean was a rebel, it was what made him a Hollywood legend, but here we are presented with an aesthete that would be more at home with the decadent likes of Oscar Wilde or Walter Pater.

Instead of chugging down whiskeys and smoking endless Marlborough Reds (although he does do some of that here), we see him catching rays by the pool as he reads Saint-Exupéry’s The Little Prince, a text that undoubtedly is an allusion to Dean’s inability to accept the adult world that surrounded him. This could have proved to be a refreshing appraisal, yet in their execution these literary allusions come across leaning more towards the pretentious than the artist. The material is there lying in wait, the intent good, but the level of narcissism A Portrait possesses leads it disappointing near to hipster territory.