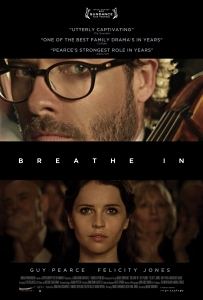 The opening film of this year’s Edinburgh International Film Festival, Drake Doremus’ sophomore effort Breathe In (2013) is the discreetly anticipated follow-up to 2011’s Like Crazy. Reuniting Doremus with Felicity Jones (who’s performance here marks a striking surge in maturity), the film also stars Guy Peace in one of his most tender and complex performances to date. The arrival of Sophie (Jones), a young British exchange student with an exceptional gift for playing the piano, to the quaint upstate New York home of failed musician-turned teacher Keith (Pearce) has a dramatic effect on his fragile family dynamic.

Connecting instantly over a shared love of music, the pair’s inescapable chemistry illuminates the stifling constraints of Keith’s life, exacerbating his difficulty overcoming the pathetic clichéd symptoms of a mid-life crisis. Breathe In is not your conventional love story, but rather a tragedy built around the opposing forces of love and duty, culminating in a brooding piece of suppressed emotions and repressed dreams. Doremus’ debut feature, Like Crazy, depicted a couple torn apart by immigration law and forced to fight for their love against bureaucracy and the temptations that surrounded them. Breathe In acts as an intriguing inverted companion piece, depicting two people drawn together by circumstance, yet desperate to fight their carnal urges. 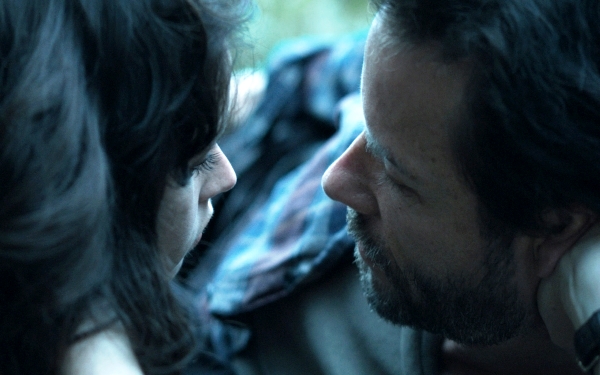 Jones plays the naive seducer in a calm, calculated, yet congenial manner. Yet it’s Pearce who’s the standout performer here, effortlessly presenting us with a man aware of the pleasant life he’s created, yet unable to shake the nagging doubt it could have all been so different. Stubbornly holding onto his dream of being a professional musician, there’s a childlike innocence to his unfailing optimism, even if they’re wrapped up in the veneer of a frank, dutiful husband and father. Sadly, the palpable chemistry shared by Jones and Pearce and the carefully woven fabric of their forbidden relationship culminates in a rather insular film where peripheral characters are merely shadows on the wall of the outside world.

Doremus’ frosty cinematography and intimate framing successfully pulls us into this illicit romance, ultimately causing Keith’s scorned wife Megan (Amy Ryan) and precocious daughter Lauren (Mackenzie Davis) to become simply physical manifestations of his unhappiness and stifled creativity. A slice of artificial drama is thrown into the mix (in the shape of some classic teenage jealousy) to evoke some sparks of passion and sexuality between Sophie and Lauren, yet the impact is so minimal that it might as well not have happened at all.

As an examination of the complexities of love and the heightened emotions of early attraction, Breathe In is a beautifully subtle tapestry of meaningful glances and unspoken desires. However, when the tension escalates beyond the control of the film’s prohibited lovers, Doremus’ graceful approach becomes woefully predictable, ultimately presenting us with a story of absolutes when life is rarely ever so black and white.