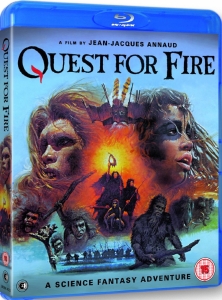 A multi-award winning 101 minutes of dialogue-less travelogue about three Neanderthal tribesmen sent on a mission to find and steal fire from another clan, Jean-Jacques Annaud’s Quest for Fire (1981) is nothing if not ambitious. Everett McGill (best known as Big Ed Hurley from Twin Peaks), Ron Perlman and Nameer El-Kadi star as the three hirsute proto-humans who encounter strange and violent scenes on their journey. Cinematographer Claude Agostini’s work is reminiscent (perhaps because of the ape-like appearance of the cast) of The Planet of the Apes, taking in a variety of sweeping vistas. 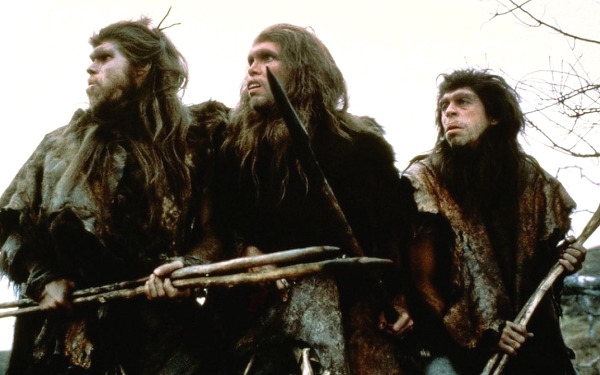 The level of technical craft on display is astonishing. Justly awarded for the brilliant make-up and prosthetic work by Sarah Monzani and Michèle Burke and natural looking production design by a whole parade of talented art directors and designers, Quest for Fire has an earthy, almost tactile look to it. A memorable face-off with a pair of woolly mammoths is particularly great showcase for the design work. The lack of speech presents challenges and triumphs: the characters, despite their undeveloped communication, are each individuated and have clear personalities (McGill’s is curious, daring; Perlman’s disgruntled, violent; Kadi the timid, jumpy one), but they never change much beyond their broad brush strokes.

The second-half introduction of a female (Rae Dawn Chong) homo sapiens to the group, body covered in ashes, eyes marked with war paint does a little to change the group dynamic, but not a huge amount. The one thing that isn’t entirely engaging in Quest for Fire is the narrative. The triad of grunting heroes happen upon sabre-toothed tigers, the aforementioned mammoths, and even a tribe of cannibals; but the inscrutable, unblinking commitment to this earnest historical eye can be off-putting when it results in multiple scenes of men in furs sitting quietly, making low guttural noises. The material also lends itself rather easily to parody, and there are a few moments that wander a little too close to that.

Annaud’s film is a true achievement of production, and this pristine Blu-ray rerelease should find the film a new generation of fans. It won’t quite be the same treasure for everyone, though: the film’s deliberate pacing can be trying, and the film’s neolithic premise will be a turn-off for many. However, stick with Quest for Fire and you may find it has something to offer even the most uninterested parties.