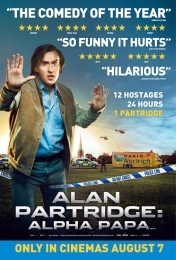 British comedian Steve Coogan’s beloved Norwich-based media whore Alan Partridge has bounced back numerous times over his 21-year career, first appearing on Radio 4 before moving on to star in a plethora of TV and internet debacles. The self-proclaimed king of chat now makes his big screen debut in Declan Lowney’s faithful and hilarious Alan Partridge: Alpha Papa (2013). A permanent fixture at North Norfolk Digital (“North Norfolk’s best music mix”), Alan couldn’t be happier. That is until corporate big boys Gordale Media buy up the station, with the specific aim of appealing to a younger, hipper audience.

Now firmly in the firing line, Alan decides to put forward his colleague, Pat (Colm Meaney), for redundancy. Unfortunately, Pat takes the news badly and decides to hold the staff of the station hostage. Yet, where many see disaster, Alan sees opportunity. Neatly expanding the character from its TV and radio roots, the film’s script (from the people behind mock-memoir I, Partridge) is laced with sharp one-liners and cringeworthy faux pas. The DJ’s blunders range from labelling playwright Oscar Wilde a “gay show-off”, to a moot, moribund radio call-in debating “which is the worst monger: fish, iron, rumour or war?” 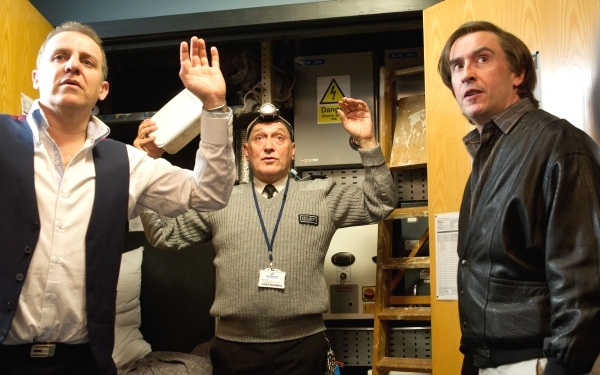 Lowney, Armando Iannucci, Peter Baynham and co. pull many a deft trick to make Alpha Papa’s story feel as cinematic as possible for a television transplant. Thankfully, the outlandish scenario concocted by the team of writers is what can only be described as ‘classic Partridge’. The overall plot unabashedly indulges in such narrative clichés as dream sequences, but far from becoming tiresome or awkward, they flow into the universe that Coogan and Iannucci co-created back in 1994. Lowney, director of Channel 4’s Father Ted, has also made sure to keep the action contained in small rooms – the rustic station, a school where the police set up operations – which retain the humdrum feel of Partridge past.

As is often the case with Alan’s exploits, Felicity Montagu’s long-suffering PA Lynn becomes the emotional anchor, getting her own moment in the limelight that could well cause a few murmurs of pity – particularly during Alpha Papa’s surprisingly (albeit light) heart-wrenching moments. Tribute should also be paid to the performance provided by Meaney which, whilst lacking in laughs per se, offers the film its truest sense of drama. Far more tragic than Alan, Meaney’s Pat is also someone who’s lost it all, but rather than falling into self-delusion opts to reach for the shotgun instead.

For hardcore fans there is the odd appearance from Michael (Simon Greenall), with Sean Pertwee also giving a blisteringly deadpan turn as a firearms officer. These examples illustrate especially how well-chosen the film’s cast is, paying homage to Britain’s homegrown comic talent rather than opting for a Hollywood name or two to boost ticket sales. Fortunately, Alpha Papa couldn’t be further from the Apatow school of comedy, and should delight fans and Alan agnostics alike. Full to bursting with laughs, pathos and more than a dash of satire, this is nothing less than Partridge perfection. A-ha!