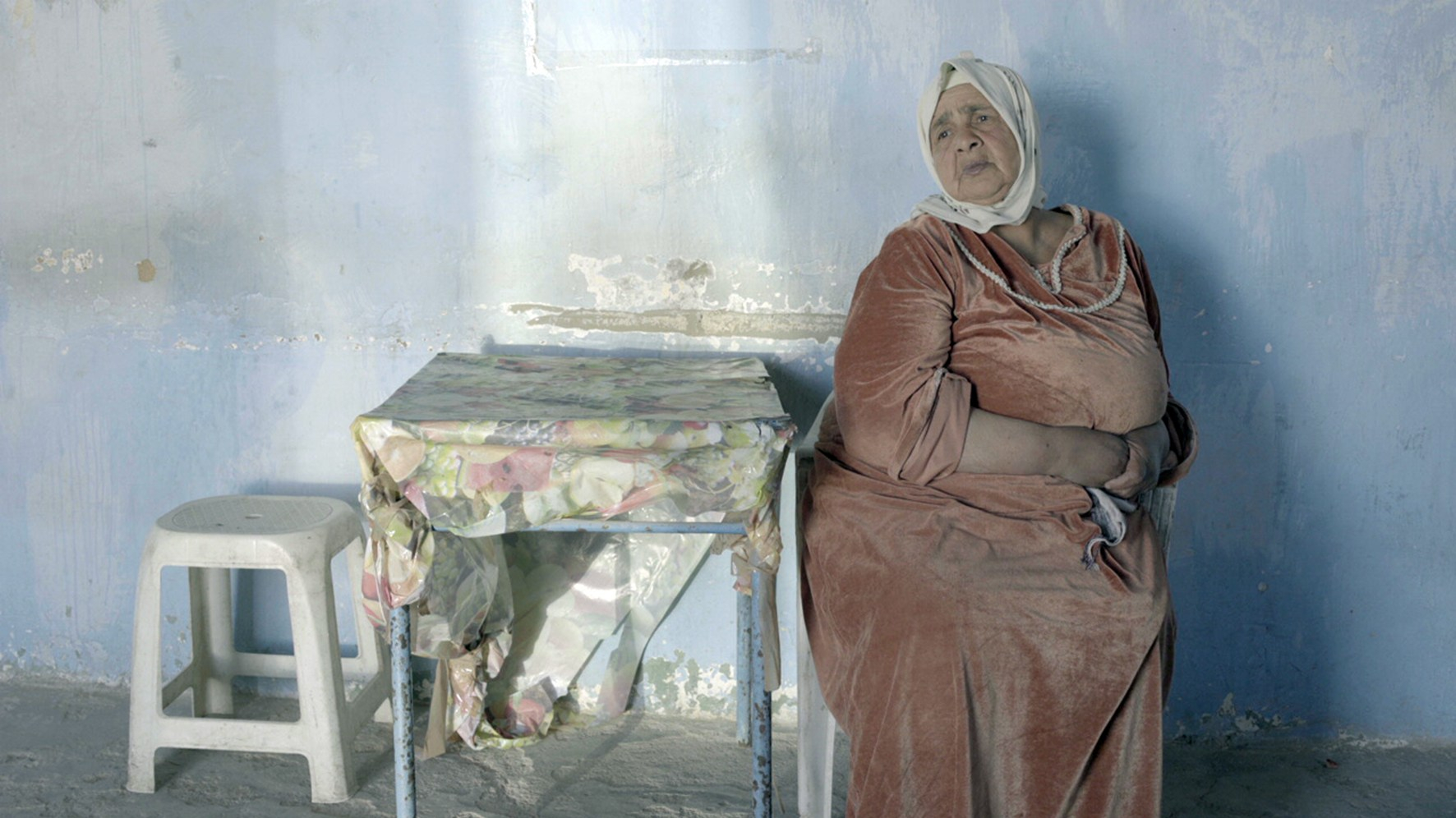 With 143 Sahara Street, documentarian Hassen Ferhani takes us to one of the most unlikely places one might expect to find a cafe: the middle of the Algerian desert. On the edge of the dusty road that cuts through the endless yellow sand, Malika waits for weary travellers in search of omelettes and cold tea served in plastic white cups.

Incorporating two rooms, a knackered table, humming fridge and a stack of water bottles, Malika’s cafe may be basic, though the inclusion of two serving hatches on an external wall is a great idea for customers requiring drive-thru service.  The natural rhythms of Malika’s routine dictate the course of Ferhani’s documentary: locals engage in theological conversation; young men play music and dance; a European biker arrives and confuses the hell out of Malika; Mimi the yowling cat steals the show.

Despite the film’s vérité style, Ferhani’s eye can’t help but be drawn to the sublimely cinematic landscape, ironically quoting the language of the Western – the doorframe looking out at that vast ocean of sand is evidently too good to resist – in this most non-Western of settings. While an eternity of empty space waits outside, Malika within her cafe seems as natural a part of the landscape as the distant mountains. Certainly, her resolve to keep the place going despite her advancing years and the threat of “two-legged wolves” from the nearby town of El Menia is as indomitable as the sandstorm-battered landscape.

But as much as she might seem otherwise, Malika has not always been in the desert, and through her conversations with her customers, valuable snippets of her past emerge, however unreliable her retelling of them might be. She tells the biker that she has no children and has never married; later she tells another guest that she once had a daughter, but she was killed. Then again, she refers to Mimi the cat as her daughter, too. The details around Malika’s (self-imposed?) exile are equally scarce, though it’s not hard to believe that her claim that rumours of her “living in sin” and “bringing women” were peddled by neighbours suspicious of her eccentric qualities.

Despite the pain hinted of these vulnerable moments, 143 Sahara Street is fundamentally optimistic. Living a hermit’s existence, Malika is revered as a valuable member of the local community; as her first guest tells her, “you are filling this no-man’s land”. Every so often, Malika’s dark eyes will open and shine, perhaps after a compliment on her faith, or an odd remark from an eccentric customer.

An impromptu comedy skit with the prison-like bars of her window and the dance she takes with a group of young men affirm the vitality of this strange oasis in the desert. Her bouts of contemplative solitude are lengthy and quiet but are punctuated by moments like these, weary travellers making a pilgrimage to see the strange woman in the tumbledown cafe. It’s certainly hard to believe that they’re only there for the tea.