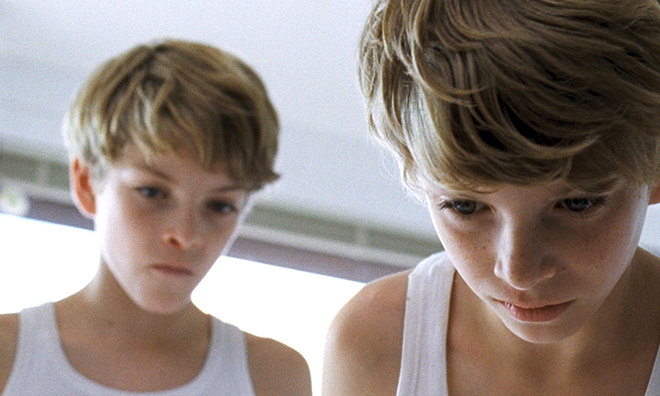 The anticipation has been palpable for Goodnight Mommy, a rare entry in what might be termed the ‘arthouse horror’ subgenre. After all, contemporary horror, with its emphasis on gore over mystery and suspense, is not the first place cineastes in search of aesthetic and intellectual stimulation tend to look. But Veronika Franz’s promising directorial debut seeks to dig a little deeper for its thrills, by exploring the reactions of twin brothers Elias and Lukas (Elias and Lukas Schwarz) to the return of a mother (Susanne Wuest) they no longer recognise.

We first meet our unnamed ‘Mommy’ as she arrives home after an unspecified period of time, having undergone unexplained facial surgery that keeps her wrapped up in bandages. The boys, convinced by her gruff demeanour that she is an impostor, begin to harass and abuse her, with each act drawing closer to the point of no return. Franz raises interesting questions about the extent to which empathy and affection are dependent on facial familiarity, and sets up an intriguing parallel between the identical twins and the doppelgänger they believe has replaced their mother.

Despite these cerebral inclinations, too much of Goodnight Mommy feels like feigned rather than genuine profundity. The complex ideas discussed above – which enhance rather than detract from the horror – are not developed satisfactorily, while much of the film’s symbolism seems weird for weirdness’ sake. The cockroaches, the dead cat in the fish tank, the cartoonish Red Cross volunteers and the mysterious delivery of a lifetime’s supply of frozen pizza exemplify this self-aware strangeness. And while one doesn’t expect a film of this genre to make perfect sense, the explanation of Mommy’s surgery – the primary source of narrative conflict – feels undecided. At various points it is either suggested that she was involved in a serious accident, or that the procedure was simply a matter of vanity; both cannot be true.

Goodnight Mommy might be a flawed film, but it remains an original and refreshing take on a tired genre. Its fantastic production values make it a highly enjoyable watch. The visual composition, sound design, setting, actors and props are all spot on, making for a deliciously atmospheric experience. The film has a stilted, cutting quality reminiscent of the work of Michael Haneke, making the – if slightly gratuitous – violence that eventually erupts all the more unbearable. The house is tastefully decorated according to the latest Scandinavian designs, which is why – with its obsessively straight lines and rigid metal/glass duopoly – it feels so frigid and soulless. Taken alongside the mother’s rule-based, loveless parenting and 1940s era footage of a creepy, lullaby-singing Aryan family, Franz seems to be directing our attention to the darker things that lurk beneath the façade of the respectable Austrian family. But once again, these ideas are hinted at without being developed, so that Goodnight Mommy paradoxically is a film best experienced by not scratching beyond the surface.