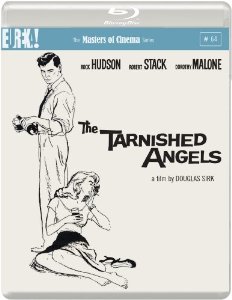 An adaptation of William Faulkner’s 1935 novel Pylon (and considered by Faulkner to be the finest of all screen adaptations of his work), Douglas Sirk’s haunting and inherently sad The Tarnished Angels (1957) has been given the Blu-ray treatment by The Masters of Cinema, a label known for cherishing the more challenging and notable notches in cinema’s lifespan. While Sirk didn’t believe it to be his greatest work, it’s perhaps best-known for being his most personal, ambitious and starkly cynical film; far removed from the more distinguishable, Technicolor-infused melodramas of that peppered his career.

Whilst visually dissimilar to the more intoxicating Written on the Wind (1956) – a spiralling and perversely glorified soap opera – Sirk (whilst collaborating again with screenwriter George Zuckerman) retains a large portion of that film’s main cast and, indeed, its subversive themes regarding post-war infatuation and obsession. Set in, and effectively evoking, Depression-era New Orleans, the film stars the typically square-jawed Rock Hudson as journalist Burke Devlin, a man fascinated by the ignoble lives of a trio of ‘gypsies’ who etch out a living in carnival circuit daredevil air shows. 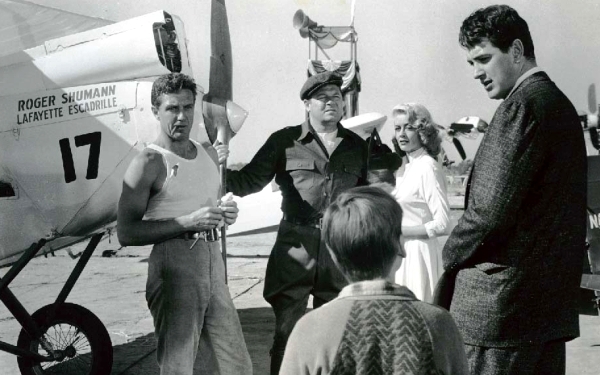 This triumvirate is fronted by Roger Shumann (Robert Stack), a former First World War fighter pilot forced into races and parachute routines with the help of his wife LaVerne (Dorothy Malone), and Shumann’s faithful mechanic Jiggs (Jack Carson). As Devlin delves deeper into the lifestyle of the former war hero, Burke begins to fall for the emotionally neglected and bitterly hardened LaVerne. When Roger becomes increasingly treacherous and consumed by his fixations with succeeding on the ever-dangerous airfield, events conspire to rupture the already unstable surfaces of his marriage to LaVerne, with Burke representing the catalyst driving Roger to make ever more rash and (ultimately) fatal decisions.

Shot in gloriously immersive black-and-white CinemaScope by DoP Irving Glassberg, The Tarnished Angels is, for Sirk, an atypical and somewhat atonal chronicle of romantic longing and unrequited desires. As the wayward, self-obsessed patriarch, Roger – excellently played with Stack’s minimalist, but customarily stern demeanour – perfectly embodies the film’s concerns with the breakdown of chivalry and simultaneous yearning for validation outside of the battleground, shown through his distinctly uncaring approach to human relationships. Similarly excellent is Malone, who manages to capture the loneliness of parachutist LaVerne, a woman who continually question her devotions.

Though Sirk’s usual subtle directorial approach takes more of a back-seat to Zuckerman’s wordy, sometimes heavy-handed screenplay that sets out to inexorably highlight several attributes of the human condition, what is most interesting about The Tarnished Angels is how fresh it feels considering it essentially repurposes and explores similar characters, subtexts and narrative templates to Written on the Wind. It’s a profound manoeuvre from Sirk, and while this may not reach the towering heights of, say, All That Heaven Allows (1955), it’s a well-arranged and melancholic preamble ahead of his best (and final) film: Imitation of Life (1959).