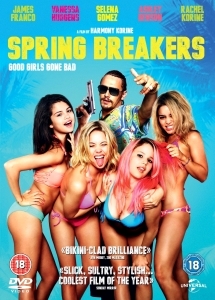 After co-writing Larry Clarke’s Palme d’Or-nominated cult smash Kids (1995), then directing Gummo two years later, director Harmony Korine has spent the majority of his time of late making short films. However, 2013 saw Korine breeze back into UK cinemas with Spring Breakers (2012); an explosive tale of sun, sea and sex in a US beach town. Korine takes care to use every tool at his disposal to further communicate his themes, including casting; enlisting former-heartthrob James Franco to play a sleazy gangster and former High School Musical (2006) sweetheart Vanessa Hudgens to portray a drug-taking siren. 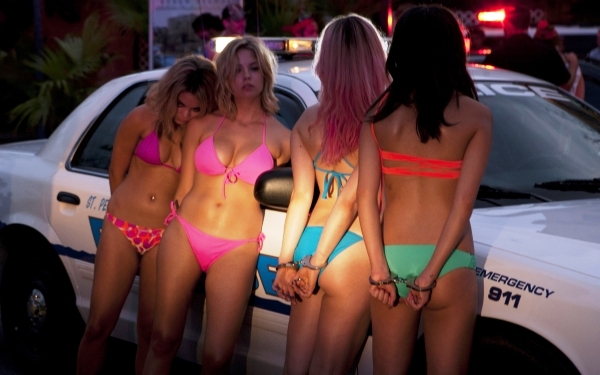 Brit (Ashley Benson), Candy (Hudgens) and Cotty (Rachel Korine) are desperate to go on spring break; an American College tradition involving legions of students descending on beach towns to get drunk, have sex and party hard. Seriously strapped for cash, the girls rob a fast food joint for extra funds. Post robbery, they grab their naive, church-going friend Faith (Selena Gomez) and head for the coast. After the first few fun-filled days, the girls get into some trouble and find assistance in the form of Alien (Franco), a part-time rapper and full time gangster drug dealer who introduces them to his world of “spring break forever”. Though this synopsis may sound relatively pedestrian, the film is anything but.

Spring Breakers is a totally unique work which is extremely rich in its themes. An exaggerated hyper-reality, the film explores a new American dream through Alien’s concept of the eternal spring break; the idea that you should have whatever you want, without having to work for it. In Korine’s world, a heightened desire for instant gratification seems to pervade youth culture; propagated by the media and the aggressive consumerism it pushes, as well as society’s obsession with elevating celebrities to godlike figures. At one point, Alien even parades his possessions around like a celeb on MTV’s Cribs.

Korine utilises both content and form to follow one possible extreme outcome of our emerging culture of entitlement, through a vivid imagined trajectory of the lengths young people will go to in order to obtain what the media trains them to believe they must. Spring Breakers is a bright, neon-dream/nightmare of an indie offering. Though it may shock or baffle at first glance, viewers need only lightly scratch the surface action to reveal a wealth and consistency of meaning rarely offered by mainstream cinema.