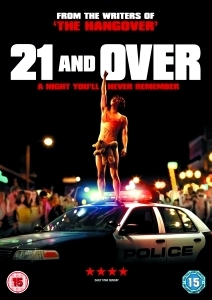 If it wasn’t for the fact that 21 and Over (2013) is directed by the writing duo which gave birth to The Hangover franchise, you’d be forgiven for accusing this boozy frathouse comedy of outright plagiarism. Cut from very much the same cloth as Todd Phillips’ curiously popular gross-out comedy, 21 and Over takes the ‘boys will be boys’ mantra down a relatively predictable and, in comparison to its peers, rather timid route. Sipping a can of Busch beer from a brown paper bag in the back of a taxi, our first impression of Miller (Miles Teller) is the perfect set-up to the particular teen comedy’s blithe persona.

Miller is about to meet old school friend Casey (Skylar Astin), a po-faced, straight-A student destined to spend his life in the high pressure surroundings of Wall Street. This comically diverse couple is on their way to meet another old acquaintance, Jeff Chang (Justin Chon), who’s about to turn 21. The plan is to celebrate this monumental birthday with a wild night of legal drinking amongst the university campus’ myriad of fraternity bars. The only problem is that Chang’s authoritarian father has arranged an important medical school interview for his son, and prohibited him from gallivanting with his irresponsible friends. 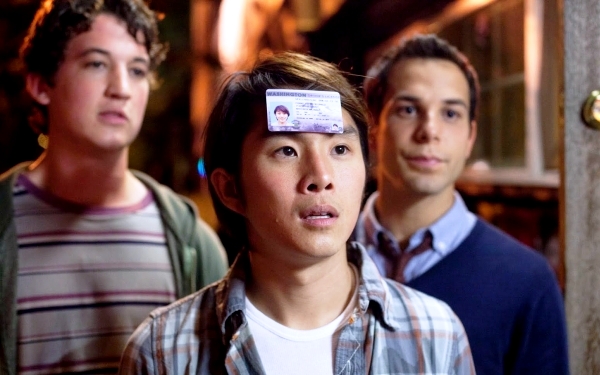 Needless to say things don’t go as Chang Sr. (François Chau) would have hoped, with the trio’s plan of heading out for a few quiet drinks quickly escalating into a full blown session, and Jeff left in a paralytic state of inebriation. Powerless to coax their friend out of his alcohol-induced coma, Miller and Casey are forced to drag their comatose friend around an endless series of wild parties in order to get him home on time. Most of 21 and Over consists of filmmaking duo Jon Lucas and Scott Moore devising a multitude of barriers for the pair to overcome, like a drunken rites of passage voyage that combines a fraternity house drinking competition, a run-in with pep rally yak mascot and a hostile sorority of Latino girls.

Whilst nowhere near as morally repugnant as last year’s nauseating Project X (2012), 21 and Over is certainly crafted from the same materials. Insistent on using cheap, bigoted humour that we’re supposed to laugh at, there’s a sense that we’re also being led to empathise with these confused young men, making there unfavourable actions impossible to overcome. Attempting to capture the youthful naivete of 2007’s Superbad, where such objectionable humour appeared to stem from a sense of adolescence insecurity, this has more in common with The Hangover – where such comedy was the product of repressed maturity.

Attempting to recreate the adolescent purge of college life in a marketable package, Lucas and Moore’s 21 and Over is ultimately little more than a collection of pacified drunken antics, endeavouring to rise above its disreputable sub-genre by adding moments of ill-advised sentiment. Without solid foundations, such feeble floundering for substance and maturity is undone by a series of ‘your sister’ jokes and hyper-stylised projectile vomit scenes; a crude, yet anodyne excursion into teen comedy, and further proof that imitation is the lowest form of flattery.