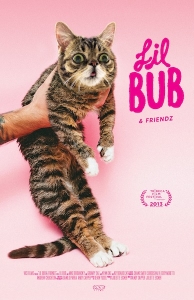 Despite featuring a host of famous internet cat memes such as Nyan Cat, Grumpy Cat and Keyboard Cat, Andy Capper and Juliette Eisner have chosen Lil Bub as the focus of their benign investigation into the incredible rise in popularity of online kitties. We’re first introduced to Bub through a garish intro that imagines her arriving from space like an alien exploring the wonders of the universe. A kitten born with several deformities, Bub was the runt of the litter, born to a feral mother, who would have been left to die had a caring neighbour not saved her. She eventually came into the care of amiable sound engineer Mike Bridavsky, who’s helped her overcome her numerous disabilities. 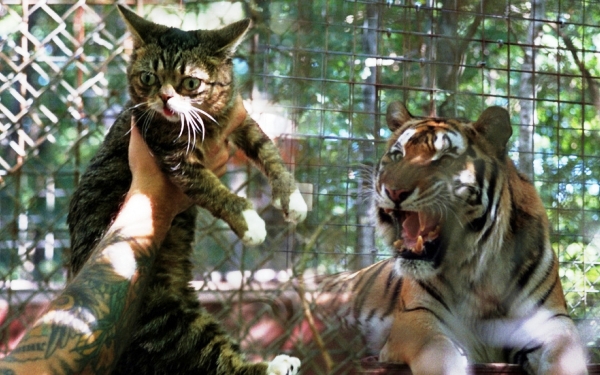 Lil Bub & Friendz won the audience-voted Best Feature Film award at this year’s Tribeca Film Festival – and it’s not particularly hard to see why. Capper and Eisner effortlessly tap into the eccentricities of this peculiar pop culture movement which propagated Lil Bub’s online fame – a facet encapsulated by Bub’s excursion to the inaugural Internet Cat Video Film Festival in Minneapolis, where 10,000 attendees flocked to indulge their cat cravings. The advancement of social media has also allowed for anyone with a remotely gregarious pet to grasp their “fifteen minutes of fame” (as Warhol would put it), and through Lil Bub we’re given a crash course in understanding one of today’s most popular, if bizarre, online communities.

Sadly, this tongue-in-cheek, Vice-produced doc never manages to rise above its mischievous gaiety, seemingly content to rest on its inherently amusing laurels. Perhaps this is because there’s very little to explore behind the hasty humour of feline memes, or maybe the realisation that exposing the peculiarities of many of these emotionally unstable cat-fanciers would alienate the film’s target audience. Either way, there’s a sense that, even with a minuscule runtime of just over an hour, Lil Bub & Friendz is overstretched. A curious journey to a big cat rescue centre (pictured) and a local tattoo parlour ultimately prove unnecessary diversions.

A little more time spent understanding Bub’s serious health issues and the logic behind these feline stars’ unique appeal – rather than cheap, papier-mâché intergalactic flights of imagination – would certainly have given Lil Bub & Friendz a little more longevity. However, as it is, anyone already invested in Bub’s cutesy life story will happily overlook the film’s unavoidable shallowness, content to merely be in the presence of one of the internet’s strangest, yet cuddliest stars.