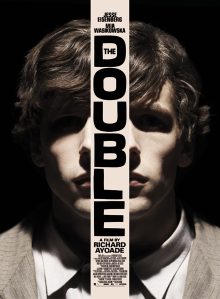 ★★★☆☆
British comic actor Richard Ayoade grabbed the attention of the UK industry back in 2010 with feature debut Submarine, a sharp, cineliterate adaptation of the Joe Dunthorne novel of the same name. His follow-up, The Double (2013), is once again based upon a literary source, this time taking its inspiration from Russian author Fyodor Dostoyevsky’s dystopian doppelgänger novella. With Craig Roberts relegated to a cameo appearance this time around – along with a veritable host of Ayoade’s contemporaries – The Social Network star Jesse Eisenberg takes the role of weedy office clerk Simon and his double, James. 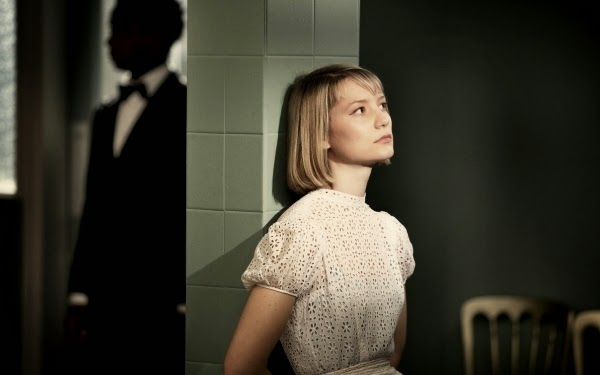 Transporting the 19th century Russian narrative of Dostoyevsky’s text to a warped, alternative version of post-war America, we follow Eisenberg’s Simon as he struggles daily to establish himself as more than just a faceless cog in the administrative machine. Forced to sign in each and every day at work due to the fact that the ever-watchful guard simply doesn’t remember him, Simon’s regular routine is one of extreme frustration and suffocating constraint. That is until new recruit James (Eisenberg again) arrives, a young go-getter who puts all those around him under his charismatic spell. When the pair decide to team up to win the affections of co-worker Hannah (Mia Wasikowska), however, things start to get out of hand.

The crisp, inventive aesthetic style of Submarine returns once again for The Double, but this time round the film’s narrative suffers – instead of benefiting – as a consequence. Whereas Roberts’ precocious youngster Oliver was au fait with the visual exuberance of the French Nouvelle Vague, Dostoyevsky’s dark and twisted tale of mad obsession and all that it entails called for a calmer, more thoughtful approach. Instead, what we get is a frenetic and sporadically engaging rendering, all smoke and mirrors but little actual substance. Wasikowska’s Hannah should represent the symbolic No Man’s Land between ‘Simon-James’, yet grows more and more into the Manic Pixie Dream Girl mould with each passing scene. Similarly, Eisenberg feels too lightweight in an admittedly complex dual-role, with Simon very much the stunted runt of the Zuckerberg litter.

This isn’t to say that The Double isn’t without its charms. The production design is particularly ingenious, treading a fine line between downtrodden Eastern Bloc grime and campy Doctor Who kitsch. It’s a genuine shame that Ayoade’s lens doesn’t spend more time exploring this surreal parallel dimension. In addition, a supporting cast so vast also inevitably throws up a few winning combinations (Noah Taylor is one of several highlights as Simon/James’ brutally honest colleague Harris), even if the likes of Sally Hawkins and Chris Morris should by now be above these types of chummy cameos. The vision was clearly there to begin with, but Ayoade’s latest ends up feeling like the skulking double of other, far superior doppelgänger dramas.