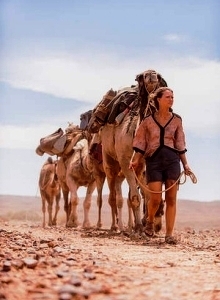 In 1975, Robyn Davidson arrived in a remote Australian town with a crazy ambition to cross the desert to the ocean using wild camels – which she planned to capture and tame – to carry her supplies, accompanied by her faithful dog Diggity. Inspired as much by a dislike of people as a love for the wilderness, Davidson faced adversity and opposition from many, but having secured the sponsorship of National Geographic she was able to begin and complete her adventure. Showing in competition at the London Film Festival, Tracks (2013) is John Curran’s retelling of Davidson’s own account of events. 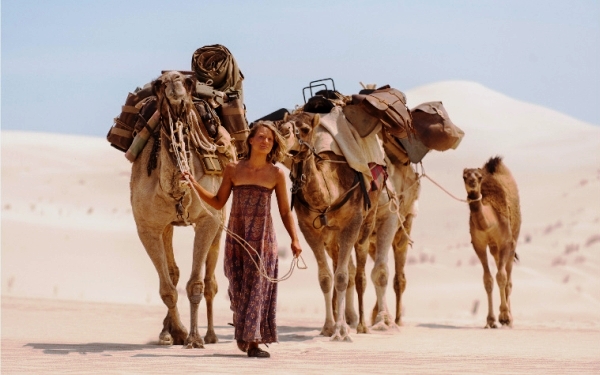 Though she arguably seems a shade young for the central role – Davidson was twenty-five at the beginning of her adventure – Stoker star Mia Wasikowska’s lead performance is finely balanced and thoroughly convincing. It certainly needs to be, as she basically carries the film, appearing in each and every scene. As can be imagined from a film which also features a National Geographic photographer as a main character – Adam Driver as Rick Smolan – there are plenty of handsome vistas to be enjoyed and an abundance of photogenic camels to admire. Smolan helps Davidson to get her funding, but only on the condition he can meet up with her on occasion in return for an exclusive desert-based photo shoot.

It’s this Faustian bargain which, to some extent, becomes an issue. After all, we’re watching a film through the lens that Davidson herself sees as both an intrusion and a fatal compromise to her mission. Because we almost always see her meeting up with Smolan or some other traveller along the way, we never get a real sense of the solitude (and the pleasure found in solitude) as we do in Sean Penn’s comparable Into the Wild (2007) or even Lean’s Lawrence of Arabia (1962). One of her friendships is with an Aboriginal guide Eddie (Roly Mintuma), who’s easygoing, chatterbox companionship reveals a (perhaps) more authentic relationship to the outback.

A rather overplayed back-story involving Davidson’s childhood trauma relegates the status of the wilderness to the position of a therapy session, helping her to work out several thorny issues. Our heroine is determined and driven, but there’s no clear purpose to her adventure and her occasional moments of doubt only serve to underline this. That said, this is a well-made and aesthetically attractive film which will no doubt help further Wasikowska’s reputation. Curran also has a good eye for detail, which proves particularly useful in showing the poverty of the Aborigines whom Davidson encounters. Tracks feels like an admirable walkabout, despite never really getting anywhere.