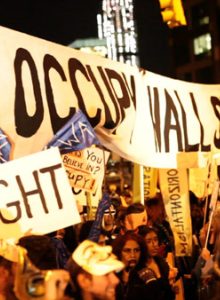 Fisher Stevens’ Occupy Wall Street documentary Another World (2014) – which premièred in the Panorama sidebar in Berlin – is as scatterbrained as the protest itself, attempting too much and delivering too little. Yet it also remains an earnest view of a movement that has created the modern Western notion of direct action. Stevens, who won an Oscar as producer of The Cove, alongside Rebecca Chaiklin, went onto the streets of downtown Manhattan in the days after the protest’s inception in order to follow the lives of six personalities up until the activists were eventually moved out by NYPD police two months later. 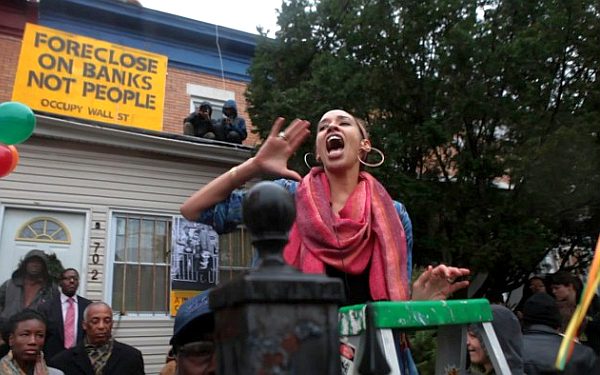 The protesters presented range from Hero Vincent – a charismatic and aspiring hip-hop artist shocked at how his mother had to be evicted after losing her job – to Bobby Cooper – a son of a farmer who killed himself after racking up thousands of dollars in debt. Along with hundreds of others, the film’s characters set up camp in Zuccotti Square, a small privately- owned public space in the financial district, where they lived open to the elements with no heat, running water or adequate sanitation. And yet somehow, a form of direct democracy emerged, a vision of ‘another world’ that is perhaps more complex and untidy than the film reveals. Another World works best when taking us through the everyday lives of these valiant activists.

However, when Stevens and Chaiklin dwell on the specifics of some of the campaigning, it’s enough to disengage us emotionally. The protester’s personal testimonies are the central drive of the documentary, but the film spreads its canvas too wide, seeming to mimic the movement’s conscious attempt at having no leader by having many voices. The directors rely far too heavily on establishing news footage cut into the documentary and the filmmaking seems slipshod, even if this is – as the directors said at the premiere – an incomplete version of the film. What’s more frustrating is that Another World comes across too much as a recruitment video which, although not said in so many words by either Stevens or Chaiklin, it probably is.

The most revealing part of the documentary comes at the finale when participants dwell on the success of their venture. Patrick Bruner, a protester we come to know who acts as the movement’s media operator, looks a gruff shadow of his former over-eager self as he comes to realise his pet revolution has lost its way. Perhaps Occupy protester’s sense of collective guilt would, in fact, make a much better subject. When Another World ends, inviting its audience to sign up to Occupy offshoots worldwide, we’re left to ponder whether the movement achieved anything tangible in the first place. There may be a new breed of global activist, but could Occupy claim to have changed a great deal for their 99%?