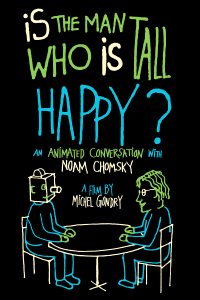 French director Michel Gondry allows himself to become the receptive canvas for the theories and concepts of famed academic and philosopher Noam Chomsky in his animated documentary, Is the Man Who Is Tall Happy? (2013). Illustrating the complexities of linguistics, this charmingly presented and incredibly modest discussion unites the playfully surreal animation of Gondry with Chomsky’s profoundly theoretical approach to language. Through a series of interviews recreated via hand-drawn illustrations, Gondry has created a vibrant (and, importantly, palatable) flipbook of Chomsky’s own intellectual cogitations. 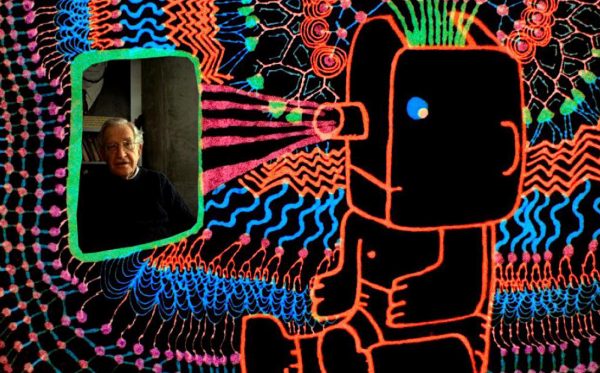 Combining the experimental French director’s creative imagination with the profundity of Chomsky’s legion theories, this lively yet enlightening film eloquently enunciates Gondry’s own curious inferences to these complex philosophical ideas. The vibrant conversation between the two men crosses a myriad of subject, including Plato’s Theory of Remembrance, the counter-intuitive nature of competition and Chomsky’s theory of generative grammar – where the film’s title suitably emanates. Whilst Chomsky educates us in a humble and modest fashion, Gondry constantly admits to his (and perhaps also the awe-struck audience’s) confusion, and in turn helps deconstruct and explore Chomsky’s theories in a more visual way.

Chomsky dispenses information like a memory bank depositing an inexorable stream of knowledge. At times Gondry’s playful animation struggles to keep up with this torrent of hypotheses and social concepts. Indeed, it’s hard not to become overloaded by such a rich deluge of visual and mental stimulation, with such dense ideas becoming difficult to digest when absorbed via this unflagging kaleidoscope of vibrant imagery. However, this isn’t to say the premise is faulty, in fact Gondry’s hyper-stylised approach will undoubtedly reward repeat viewings and at times perfectly coalesces with Chomsky’s imaginative analogies – especially when explaining the concept of psychic continuity.

A modest and unassuming labour of love, Is the Man Who Is Tall Happy? may be guilty of letting its flashy dynamic dominate proceedings. However, for a majority of the film’s audience this will be what initially attracts them to the movie. Whilst it all may feel like a good-humoured information dump, Gondry and Chomsky’s collaboration actually asks us to question and challenge both language and the media institutions that use it against us. Chomsky has repeatedly spoken about how language has become the most powerful weapon in the world, as entire nations are mobilised over abstract concepts such as freedom and terrorism. With Gondry’s assistance, we can now visualise this process.