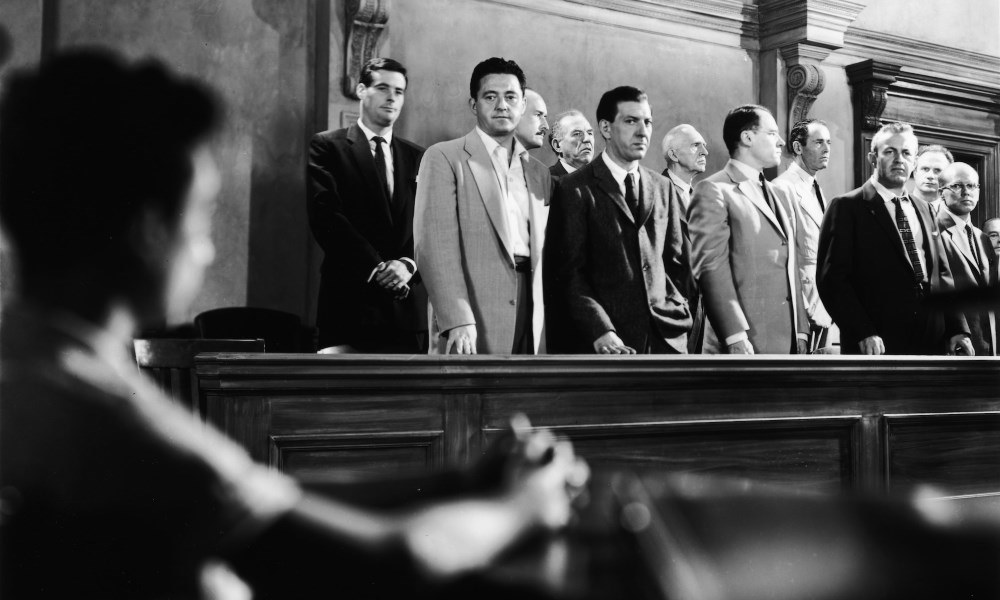 In the 60 years since its release, Sidney Lumet’s masterpiece has lost none of its impact. In this age of unreason, 12 Angry Men remains sorely and urgently contemporary. Filmed originally as a TV movie, Reginald Rose’s screenplay is one of the best ever filmed.

Shot in real time à la High Noon, 12 Angry Men follows the jury through the entirety of their deliberation. And though the notion that a murder jury could reach a verdict in only 90 minutes may stretch the limits of credibility, a surfeit of riveting performances, a flawless screenplay and human drama far outweigh any pedantic niggles. In a preliminary count, Juror 8 (Henry Fonda) is the only one to vote not guilty, standing against eleven others convinced of the accused’s wrongdoing. The facts, recited by Juror 3 (Lee J. Cobb), initially seem stacked against Juror 8. A guilty verdict may seem reasonable, but that eleven out the twelve jurors are so quick to send the accused to the electric chair is deeply chilling.

12 Angry Men depicts prejudice and weakness in all their dimensions, yet avoids proselytising by framing them as mere human fallibility. Fonda is, as one might expect, the image of decency, but there are other heroes in the room – Juror 9’s (Joseph Sweeney – reprising his role from the TV movie) quiet dignity moves even his most stubborn colleagues and his brave support of Fonda’s Juror comes at a crucial turning point. Likewise, the reasonable and patient Foreman (Martin Balsam) is vital in keeping things on an even keel. On the other side, Ed Begley’s Juror 10 seethes with racism, whereas Juror 3’s transference over his regret about his estranged son slowly and movingly unravels. Most despicably of all, Jack Warden’s revoltingly selfish seventh juror- doing his best impression of Barney Rubble – just wants to see the ball game, changing his verdict when he thinks it might get him home sooner.

Yet Fonda’s relentless sense of reason and decency cannot fail to chip away at his fellow jurors’ fundamental humanity. As he methodically undermines the case for the prosecution, and as each juror falls like so many dominoes, the weight of reasonable doubt cannot be denied by even the most obdurate of the men. Although 12 Angry Men dismays at human weakness, it is fundamentally an optimistic film, celebrating reason and basic human decency in equal measure. In an era when both seem in short supply, Lumet’s film is a reminder that there is never a bad time to stand up for what is right.