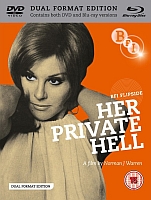 The ‘Her’ of the title refers to Marisa (Lucia Modugno), a young Italian model who has travelled to the London of the Swinging Sixties in search of fame and fortune. Snapped up off the street by charismatic photographer Bernie (Terry Skelton) and his young assistant Matt (played by Frenchman Daniel Ollier, with his largely incomprehensible dialogue re-dubbed in post production), Marisa is thrust into the world of glamour modeling. A love triangle soon envelops the three characters, with adultery and betrayal the inevitable consequence. 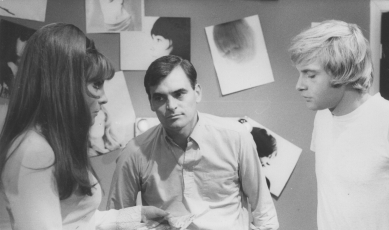 Dialogue is used sparingly used, with Warren’s roving camera preferred to drive the narrative – of what little there is. What Warren does successfully convey, however, is London’s status as an avant-garde superpower, able to draw in free-thinkers from across Europe with promises of scenester-status, inclusion and prosperity.

Whilst by no means a classic of 60s cinema, Her Private Hell deserves recognition as a telling artefact of the time. Whilst the flurry of popularity it received upon release may have been predominantly due to its multiple nude scenes (it ran for over a year across the capital), this BFI rerelease will hopefully restore some dignity and artistic merit to Warren’s obscure, eroticised ménage à trois.