A mind-boggling twelve years in the making, Richard Linklater’s quietly monumental new film, Boyhood (2014), somehow manages to dwarf his decades-straddling Before series in almost every conceivable way. Following the maturation of six-year-old Mason (a constant Ellar Coltrane) all the way up to his first day at college, never before has a coming-of-age tale been played out on such a grand, vast canvas. For once, at least, the early hyperbole is entirely justified. It’s difficult to think of a recent American indie – or mainstream offering, for that matter – that comes close to equalling the wild, childlike ambition on display here, which makes it by some distance the best in show at this year’s Berlinale. 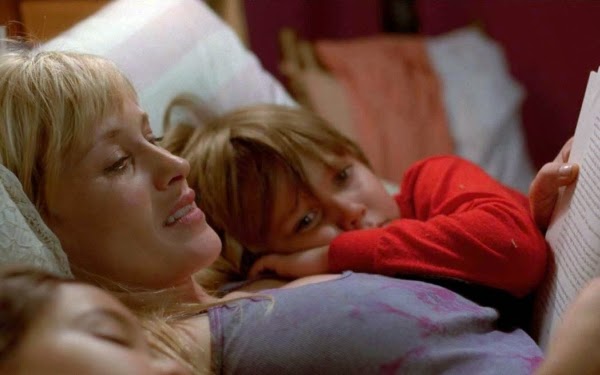 Introduced to the strains of Coldplay’s Yellow (stay with us) as he gazes up longingly towards the clouds, child of divorce Mason lives with his big sister Samantha (Lorelei Linklater, daughter or the film’s director) and mother Olivia (a superb Patricia Arquette) in their small Austin abode. His father (Linklater favourite Ethan Hawke) has just returned from a stint working in Alaska, and is keen to reconnect with his estranged offspring despise the obvious hostility between himself and his ex-wife. Grades gradually pass by as Mason must come to terms with an obnoxious and alcoholic stepfather (a repulsive Marco Perella), amongst other trials and tribulations. A keen interest in photography emerges as Mason enters his mid-teens, whilst he also takes his first tentative steps into the arena of courtship.

Mason’s – and consequently Coltrane’s – physical and emotional growth is an absolute joy to behold, Linklater effortlessly capturing the zeitgeist of the passing years through pop culture references to movies, music and video games, as well as significant real world events. With filming taking place each and every year since 2002 in between the busy working schedules of the cast, crew and director, the very fact that Boyhood exists at all is a testament to the craft and vision of all involved – particularly Linklater. Not only has he managed to shoot and release a handful of superb standalone features in that time, alongside the likes of Before Sunrise and Before Midnight (with Hawke), but he’s also helped nurture the evident talents of his leading star from bug-eyed kid to free-thinker.

One can’t help but imagine the myriad of technical and logistical obstacles that Boyhood must have had to overcome during its twelve-year production (if awards were given out for continuity you’d bet your house on Linklater and co. wiping the floor with the competition). As it is, the history behind this filmmaking feat should find itself the topic of industry discussion for months and even years to come. It would also be nice to think that the adult cast, particularly a never-better Arquette as Mason’s magnificently devoted mother, will receive the acclaim they deserve for backing their director over such an unthinkable shooting period. Favouring naturalistic warmth over clichéd melodrama and realism of performance above all else, Linklater’s Boyhood is an utterly enrapturing marvel.

Boyhood featured in CineVue’s ‘Best films of 2014’ feature. You can read the full list here.