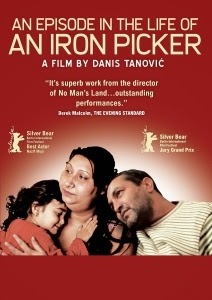 In 2011, Bosnian director Danis Tanović read a story in a newspaper about the touching travails of an impoverished Roma family before later taking it upon himself to tell their story. Three years later, his neorealist drama An Episode in the Life of an Iron Picker (2013) arrives in selected UK cinemas having claimed the Jury Grand Prize at the 63rd Berlinale and being chosen as Bosnia’s entry at this year’s Academy Awards. Documentary-like in feel, Tanović has decided to recreate events by casting the family themselves in a film that raises important points yet lacks dramatic heft. With a camera trained over his shoulder, Nazif (Nazif Mujic) spends his days foraging for scrap metal in a remote township. 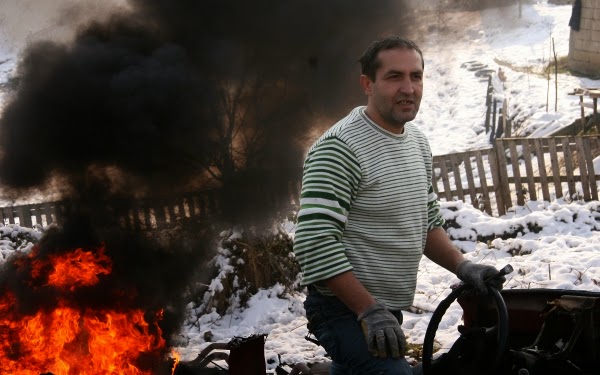 Nazif collaborates with his friends to scrap abandoned cars before returning home at night to his pregnant wife, Senada (Senada Alimanovic), and his two joyful daughters. It may have its hard times, but Nazif clearly enjoys a happy and relatively stable family life. One day, however, he steps through the door to find Senada in terrible agony and promptly hurries her to the nearest clinic (which is hours away) to find that she has miscarried. What’s more, she needs urgent treatment which, being unable to afford medical insurance, they are asked to pay hundreds of marks for. The family return home without Senada receiving the required aid, whilst Nazif must find some way to scrape together an unimaginable sum of money for an iron picker. Throughout, Tanović’s camera is fixed tightly on his cast.

This intimate portrait really does strip away any layers of façade that its audience are perhaps only reminded of by the slightly stilted performances – to be expected from a family reliving a harrowing ordeal. As events seem to conspire against Nazif – his car breaks down, there’s a blackout – the tense atmosphere does dissipates a little, meaning that the narrative never truly reaches an emotional crux. Still, it’s the hideous bureaucracy and institutionalised racism towards the Roma people in Bosnia and Herzegovina that Tanović is genuinely interested in exposing, which he certainly does.

Audiences may have witnessed a little of the persecution of Roma communities in Filip Marczewski’s Polish offering Shameless (2012), but here its full regulated force is vividly apparent. The problem might be that without the wider context offered by straight documentary, or the emotional impact of a straight narrative, An Episode in the Life of an Iron Picker – and its message – could slip between the cracks. This hopefully won’t be the case, however, as despite its flaws and grim veneer, Tanović’s drama makes for compelling and touching cinema with something crucial to say.